Jet City Comics, the new comic-publishing imprint of Amazon, have picked up the reprint rights to George R.R. Martin's Dunk and Egg graphic novellas. They will be reprinting The Hedge Knight on 5 November 2013 and The Sworn Sword on 21 January 2014. Random House will also be getting the gang back together to produce a new comic book adaptation of The Mystery Knight, for publication later in 2014. 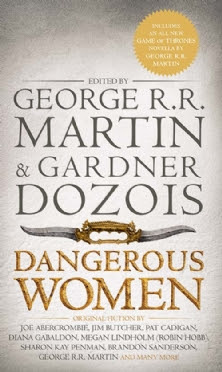 In addition, HarperCollins Voyager in the UK have announced they will be publishing a British edition of Dangerous Women in December. This book will contain a new Song of Ice and Fire novella, The Princess and the Queen, about the civil war known as the Dance of Dragons. Martin is still hoping to publish The World of Ice and Fire in Spring 2014, though officially its release date remains November 2014.

No news on the Big One, unfortunately. The last word on the book from the start of the year was that it was about a quarter done and Martin had either completed or put aside all other projects (including the fourth Dunk and Egg story) to focus on it, later remarking he was making 'rapid progress' against the threat of HBO bearing down and catching up with him. Recent casting announcements for Season 4 of Game of Thrones seem to confirm that rather more of the Feast for Crows and Dance with Dragons storylines will be featured than first thought, meaning that they will likely reach Winds of Winter material by 2016, if not the end of the 2015 season.
Posted by Adam Whitehead at 10:27

Email ThisBlogThis!Share to TwitterShare to FacebookShare to Pinterest
Labels: a song of ice and fire, dangerous women, dunk and egg, george r.r. martin, the hedge knight, the mystery knight, the sworn sword, the winds of winter, the world of ice and fire

I hate to say it, but I truly believe that Martin will not finish Song of Ice and Fire. Or if he does, it will not be until HBO has finished with the series. Based on some interviews a few months ago, he seems to be in denial of the fact that HBO will probably just forge ahead if the show catches up to the books. This is especially true if the show cuts out as much material from Feast and Dance as many fans expect it to. The mainstream audience will probably not have the patience to wade through a lot of it. Many of the non-book reader friends of mine have already complained about how much the second half of S3 dragged.

I think he's not going to give us much info in terms of a progress update until he's close to being finished. I think he really wants this series to go down as one of the all-time greats and hopefully that will motivate him to stay ahead of HBO and finish it soon. Otherwise his place in the pantheon of great genre authors will always be questionable

Hi! Have just been going through A Forum of Ice and Fire. You have a lot of scholarly analysis there, which should if possible be put in ebook format. There are at least six threads related to foreshadowing alone and something like 21 threads on Sansa Stark. Is there any plan to do something of this nature? The fact that you have so much analysis going on from the literary, historical, mythological and psychological standpoints should be of interest...