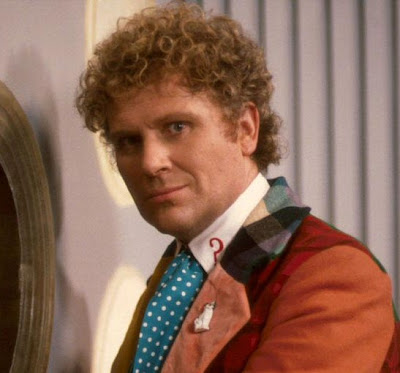 Colin Baker (1943-  ) played the Sixth Doctor in 31 episodes and eight serials, airing over two seasons and part of a third. He had two companions. He had the shortest tenure of any of the 'classic' Doctors in terms of episode count and is the only actor to play the role to be dismissed against his will. However, he later reprised the role on stage. His brief tenure introduced the Rani, a female Time Lord villain, and the concept of the Valeyard, a 'dark' future incarnation of the Doctor that has been referenced in the current series.

When the time came to cast the Sixth Doctor, producer John Nathan-Turner decided on a different approach. The idea was that the new Doctor would be highly erratic after his regeneration and for some time after, but over time would mellow and evolve into a more complex character. To play the role Nathan-Turner decided to cast Colin Baker, an actor who could play both 'cuddly' and 'threatening'. However, the decision was controversial with fans as Baker had already appeared in the show, playing a Gallifreyan security commander in Arc of Infinity. In particular, script editor Eric Saward wasn't keen on the choice.

It would be fair to say that Baker was not an immediate hit with the viewers. His first story, The Twin Dilemma, was the final serial of the twenty-first season. If The Caves of Androzani is widely-regarded as one of the very best Doctor Who stories of all time, The Twin Dilemma is regarded as one of its absolute nadirs. A combination of a terrible script and the Sixth Doctor trying to strangle his companion Peri to death in post-regenerative confusion left audiences unimpressed with the new Doctor, and the lengthy wait for the new season meant that fans had a lot of time to complain about the situation.

The twenty-second season had a format shift as well. The BBC had been impressed with the performance of Resurrection of the Daleks, which for scheduling reasons had been turned from an ordinary four-parter into two 45-minute episodes. For the new season they ordered that the series switch to this format permanently. So, whilst the season was 'only' 13 episodes long, it was the equivalent of 26 ordinary episodes, which had been the norm (more or less) since 1970. This was notable as The Two Doctors, which was three double-length episodes long, would otherwise have been the show's only six-parter of the final ten seasons. 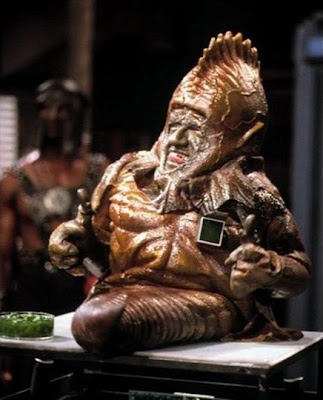 The slug-like Sil is one of the most memorable creations of the Sixth Doctor's era.

The season had a mixed reception. Attack of the Cybermen, another Cyber-epic in the vein of Earthshock, was disappointing. Timelash was terrible. Vengeance on Varos introduced a memorable villain, Sil (played by disabled actor Nabil Shaban), but was otherwise unremarkable. The Two Doctors stood out for bringing back Patrick Troughton as the Second Doctor and Frazer Hines as Jamie McCrimmon and pitching them and the Sixth Doctor and Peri against the Sontarans, but it still wasn't great.

Amidst critical apathy, a budget crisis in the wake of the expensive launch of the soap opera EastEnders, and the apparent disgust of BBC-1 controller Michael Grade, Doctor Who's twenty-third season was delayed by six months and was reduced in duration to just fourteen 25-minute episodes. Fans feared that Doctor Who was being geared up for cancellation primarily due to Grade's widely-reported hatred of the show (although viewing figures had remained at a respectable 7-8 million during the twenty-second season) and launched a campaign to 'save' the series. This resulted in one of Doctor Who fandom's lowest ebbs, the execrable Doctor Who 'charity single' 'Doctor in Distress'. Do not even think of YouTubing it.

The series returned in late 1986 with a new, over-arcing storyline which saw the Doctor put on trial by the Time Lords (again). This time the trial was more vigorous and saw various events from the Doctor's recent (and even future) life highlighted to help him defend himself. The writing of the season was a complete disaster, with Saward's long-simmering disagreements with Nathan-Turner finally exploding and him quitting mid-season. Robert Holmes, the veteran and acclaimed Who writer who had started working on the show again recently, then tragically passed away with his scripts incomplete, leaving the rest of the team to hastily finish them. The Trial of a Time Lord season was derided for its confusing nature and poor-quality scripts, despite a memorable guest appearance by Brian Blessed as an alien warlord who shouts a lot.

Aware that cancelling the show would result in a lot of headaches, Grade decided to bring the show back but move it to a weekday slot, make the episode reduction permanent and to fire Colin Baker, who did not appear to be popular with viewers. John Nathan-Turner reportedly argued Baker's case but was overruled. Nathan-Turner also attempted to quit but was told - as a BBC employee - that he could not. Thus the Sixth Doctor's brief tenure ended with a wimper.

Review ratings are only given for complete serials I have seen, which isn't very many. Those looking for an in-depth and unusual review of the entire series are directed to Adventures with the Wife in Space, in which a committed Doctor Who fan exposes his wife to the series and records her reactions.

The Sixth Doctor did not have an on-screen regeneration as such. Instead he was show in the latter stages of regeneration in the first serial of Season 24. Officially, the TARDIS sustained serious damage in an attempt by the Rani to capture it, forcing the Doctor's regeneration. Spin-off media, pointing out that it seems unlikely that the human Mel would survive such stress that would trigger the Doctor's regeneration, has suggested alternate theories. A popular one is that the Doctor himself triggered his regeneration upon realising that the erratic nature of his sixth incarnation was what would eventually lead to the creation of the Valeyard, and by regenerating prematurely he was averting that future.

I've never heard that retcon theory about the 6th Doctor's regeneration before.

I love that theory about why the sixth doctor regenerated.