Gearbox held a fan community event today where they had a Homeworld-focused panel (starting at 39 minutes) featuring representatives from both Gearbox and Blackbird Interactive, who are developing Homeworld: Shipbreakers and whose members developed the first two games in the series. 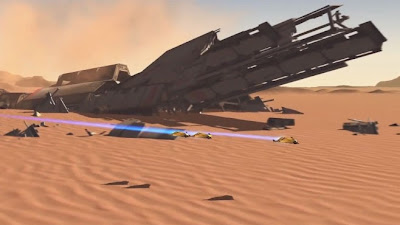 It was confirmed that Shipbreakers will be a prequel taking place on Kharak, the planet the Hiigarans were exiled to several millennia before the events of the games. They also confirmed that the Free-to-Play model for the game has been abandoned and there will be a full commercial release on Steam. They are also looking at ways of releasing the game physically, potentially in a limited edition box set with a model of a Homeworld spacecraft included (this was first mooted jokingly, but the positive reception in the audience have led them to reconsider it).

They have also successfully located all of the source files for the original two games, including audio and music, and are currently working on upgrading them for the HD versions. They have also confirmed that the original composer for the first two games (and the Cataclysm spin-off game) will be working on the HD remakes.

A number of other issues are being looked as, such as bug fixes and how to handle the thorny issue of resource gathering. In the Homeworld games collected resources are carried over from one mission to another. The original Homeworld allowed you to choose when to exit a mission once all resources have been collected, but this can take some considerable time. The benefit of this is that it allowed you to build new units and research new tech at the end of each mission before starting the next one. Homeworld 2 automatically had you collecting all resources on each map at the end of each mission, which was much faster but denied you the ability to reconfigure your fleet before the next mission. Homeworld: Cataclysm (which is not being updated due to the loss of the original source files) used the Homeworld model but included a 'speed up time' button, which seemed an excellent compromise. Gearbox are asking for feedback on this issue on their forum.

Blackbird have also confirmed that their 'Prospector's Guide' pre-purchase scheme for Shipbreakers that they launched before the team-up with Gearbox happened has been shut down. They are refunding the early adopters in full and will still give them a free copy of the final game in thanks for their support.

The re-releases of Homeworld and Homeworld 2 are anticipated for 2014. Homeworld: Shipbreakers does not have a release date as yet.
Posted by Adam Whitehead at 17:38

This is fantastic news and I hope they make truckloads of money, which will of course lead to development starting on Homeworld 3.

I can't wait. I am looking forward to just seeing Homeworld and Homeworld 2 out again.

Loved those game. LOVE them.