THE EXPANSE optioned for television

The Expanse, the six-volume space opera series written by Daniel Abraham and Ty Franck under the pen-name James S.A. Corey, has been optioned for television by Alcon Television Group. 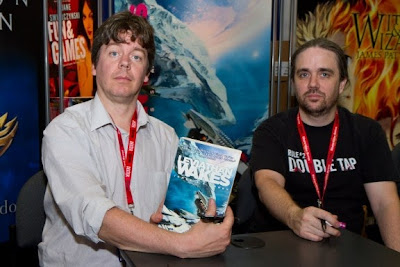 The Expanse consists of the published novels Leviathan Wakes, Caliban's War and Abaddon's Gate, with three more books projected. Set in the 22nd Century, it depicts tensions in a colonised Solar system that are heading to war. Government and corporate conspiracies abound, as does the possible discovery of alien life.

Mark Fergus and Hawk Ostby will be writing the pilot episode and will co-produce. They are best known for writing the script for the original Iron Man film, as one of the drafts of the film Children of Men.

Alcon Television Group is developing the series internally before shopping it to networks. It remains to be seen which ones will be interested. This is obviously great news for Daniel and Ty, and it'll be interesting to see how it develops.
Posted by Adam Whitehead at 16:36

Sounds pretty cool, although it might be a budget-buster without some drastic changes.

Although. . . I've found that CGI tends to look a lot better if it doesn't have real people in it to contrast against. The CGI in BSG Blood and Chrome, for example, looked the best when real-life human characters were not standing next to it.

Yeeeees please! There has not been a proper space opera tv show in years! Hope it gets the green light!