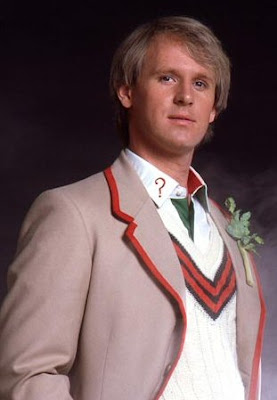 Peter Davison (1951-  ) played the Fifth Doctor in 69 episodes and 20 serials, airing over three seasons. He had six companions. At 29 he was the youngest actor to be cast as the Doctor, a record he held until the 27-year-old Matt Smith was cast in 2010. He is the only Doctor (so far) from the classic era to reappear in the modern outside of images or flashbacks, appearing in the mini-episode Time Crash in 2007. Davison's daughter, Georgia Moffett, is married to David Tennant, who played the Tenth Doctor.

The Fifth Doctor's era was one of reinvention for Doctor Who. The casting of the 29-year-old Peter Davison as the Doctor and the presence of three young companions meant that the show had a younger, fresher atmosphere going on. There had also been a decision to drop the longer, six-episode serials to keep stories shorter, more focused and tighter. Christopher Bidmead departed as script editor and, after a brief filling-in by Anthony Root, he was ultimately replaced by Eric Saward. Saward was more interested in drama and making the show scary again, leading to some comparisons with Robert Holmes (right down to, once again, receiving criticism of the show for being too violent). 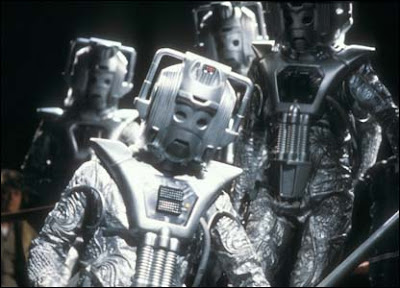 Davison's first season was focused mostly on new threats and menaces, though with a hint of experimentation. Black Orchid was a pure historical, that is a serial lacking any SF elements at all apart from the Doctor and his companions.  This was the first such serial since The Highlanders fifteen years earlier and the last to date. More notable was Earthshock. John Nathan-Turner had decided to resurrect the Cybermen, who hadn't been seen since Revenge of the Cybermen seven years earlier (which in turn had been their sole appearance on the show since The Invasion in 1968). A new, sleeker and more advanced-looking Cyberman costume (by the standards of 1982) was introduced and Earthshock was written as more of an action story, featuring scenes of combat between the Cybermen and human marines. The story also made history when, at its conclusion, it killed off Adric (played by Matthew Waterhouse). Adric had not been popular with the fans and Nathan-Turner decided that killing him off would restore some dramatic tension to the show.

The twentieth season in 1983 saw the return of several old enemies: Omega returned in Arc of Infinity, which also featured a return to Gallifrey (and, intriguingly, the casting of Colin Baker as a Time Lord security guard), whilst the Black and White Guardians and a now-retired Brigadier Lethbridge-Stewart reappeared in Mawdryn Undead. This serial also introduced a new companion, the enigmatic Vislor Turlough. Turlough was introduced as an antagonist, an agent of the Black Guardian's placed on the TARDIS to spy on the Doctor and eventually to kill him. Two serials later he instead helped the Doctor defeat the Black Guardian.

The Master returned in The King's Demons which also introduced a recurring android character, Kamelion. Originally planned to be an active companion, difficulties with the Kamelion prop led him to being put in storage and only making one more major appearance on the series. 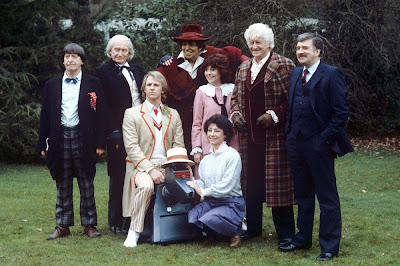 Publicity shot for The Five Doctors, including a waxwork dummy of Tom Baker!

For the twentieth anniversary itself, Nathan-Turner and the BBC decided to make a 90-minute special event episode. This episode would air separately to the rest of the season, as close to the actual anniversary itself. Veteran Who writer Robert Holmes initially worked on a script concept called The Six Doctors but eventually could not deliver the script in time. Terrance Dicks submitted a story called The Five Doctors featuring all of the previous Doctors and assorted companions. The sad death of William Hartnell meant that the First Doctor had to be recast, with Richard Hurndall stepping in. Tom Baker then declined to appear, believing it was too soon after his own departure from the programme. He instead appeared in clips from the abandoned 1980 serial Shada. Despite it's everything-and-the-kitchen-sink approach (with Cybermen, a Dalek, the Master, various Time Lords, five Doctors and eight companions appearing), The Five Doctors turned out to be a popular, fun romp.

Working on the advice of Patrick Troughton, who had theorised that three years was the optimum time to stay on the show, Peter Davison decided to leave the show at the end of the twenty-first season. John Nathan-Turner decided to break with tradition and have Davison leave in the penultimate serial of the season so the new Doctor could have a full serial to 'bed in' before the break.

Davison's final season featured the return of the Silurians and Sea Deviles in Warriors of the Deep (a Cold War-riffing action story that was not very popular) and the return of the Daleks and Davros in Resurrection of the Daleks. This was a much more popular serial, commenting as it did on the violence of the show. Companion Tegan left the TARDIS at the end of the serial, sick of the death and destruction that seemed to follow the Doctor around. Turlough followed in the following serial, which also introduced the new companion of Peri Brown, played by Nicola Bryant. Nathan-Turner decided to make the new companion American to appeal more to the US audience, although Bryant was British. 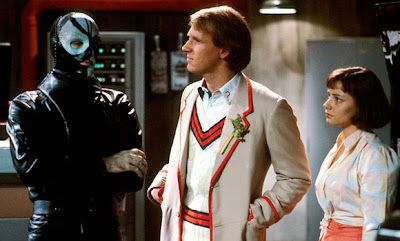 The Caves of Androzani has been voted the best Doctor Who story of all time by several fan polls.

Davison went out on a high. The Caves of Androzani, written by a returning Robert Holmes, is still-rated as one of the finest Doctor Who serials ever, and arguably the last stone-cold classic the show has produced to date. Davison gives a tremendous performance and the direction from Graeme Harper is unusually accomplished for the show (Harper would later become the only director to work on both the classic and revived series). Christopher Gable also gives a tremendously intense and threatening performance as Sharaz Jek, the 'villain' (albeit a tragic one) of the serial.

At the end of the serial the Doctor regenerates, but almost dies. Only images of his companions - featuring specially-recorded new clips of Adric, Nyssa, Tegan, Turlough and Kamelion - keeps him going. When the Sixth Doctor gets up and a confused Peri asks what has happened, he replies, "Change, my dear, and it seems not a moment too soon."

Review ratings are only given for complete serials I have seen, which isn't very many. Those looking for an in-depth and unusual review of the entire series are directed to Adventures with the Wife in Space, in which a committed Doctor Who fan exposes his wife to the series and records her reactions.

The Fifth Doctor regenerated at the end of The Caves of Androzani, having been poisoned with spectrox toxemia. He was able to secure some antidote, but only enough to save his companion Peri.

Caves is definitely one of the best Doctor Who serials.

Poor Adric. Waterhouse was Wesley Crusher before Wil Wheaton was.

Thanks for the great continuing history of the Doctors. What I think you may have missed mentioning here was that I think there was an expectation on the BBC that Davison might bring some of the audience with him from All Creatures Great and Small, where he'd been very popular playing Tristan Farnan, giving a little bit of a boost to him being so young and stepping into Tom Baker's rather large shoes.

And while I've seen every single one of these episodes, I can't remember many of them at all to give them a rating! Suffice that Caves of Androzani was definitely epic - even if the plot was perhaps a bit of a rip off from then extremely popular Phantom of the Opera. Given how much Davison could bring to the show, I was a bit disappointed that he wasn't used this way more often.

And next come the Dark Years: the Sixth Doctor era. God help us all.

It wasn't Colin Baker's fault, the studio was screwing with them.

But...I'd almost go so far as to call it a "Second Lost Era" - the first was all of the first/second doctor black and whites lost to time, but the Sixth Doctor Era was a gutpunch from which the show never recovered....I mean have you sat down and *watched* a couple of Sixth Doctor episodes?