Homeworld was developed by Relic, published by Sierra/Vivendi and released in 1999. It broke new ground for the real-time strategy genre, with a persistent military force that you built up from mission to mission, as well as resources you kept between missions. The game allowed full 3D movement of spacecraft, from lumbering dreadnoughts and carriers to small, nimble fighters and bombers. The game was noted for its fantastic music (a mixture of original tunes and classical music), its sombre atmosphere and its rich storyline.

The game, set in the Whirlpool Galaxy and not involving Earth at all, opened with the people of the desert planet Kharak discovering the wreck of an ancient starship, the Khar-Toba. Inside the ship they found an intact Hyperspace Core, allowing them to travel faster than light, and also a guidestone showing a route across the galaxy to another planet. The people of Kharak realised they were descended from settlers from another planet, Hiigara, their true homeworld. They constructed a massive Mothership to find Hiigara but during its testing run Kharak was obliterated in an alien attack. With the population reduced to half a million settlers (most of them in cryo-sleep), the crew of the Mothership had to guide the survivors of their race to their true home, discovering all sorts of secrets about the galaxy along the way.

A stand-alone expansion, Homeworld: Cataclysm (developed by Barking Dog Studios) was released in 2000. The game, set 15 years after Homeworld, saw a small mining clan forced into a desperate battle with an alien force called the Beast. The game was even more critically acclaimed than its forebear. Sadly, Homeworld: Cataclysm's source code has apparently been lost for good, making a re-release or HD remake unlikely. 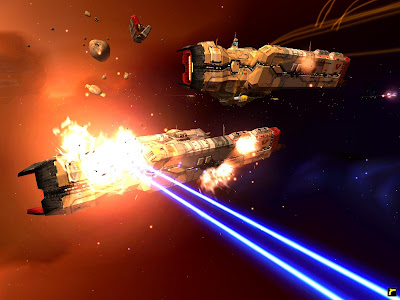 A capital ship blowing up in Homeworld 2, yesterday. Or, more accurately, ten years ago.

Homeworld 2, released in 2003, was set 100 years after the events of Cataclysm. A new Mothership, the Pride of Hiigara, has been built to defend against an encroaching alien threat and locate two other missing Hyperspace Cores. If the three Cores can be reunited, it will allegedly usher in a new golden age for the galaxy. However, the alien Vaygr are also after the Cores.

After Homeworld 2's release, Relic was sold to THQ and developed the Dawn of War and Company of Heroes franchises. THQ bought the Homeworld IP from Vivendi in 2007, but failed to do anything with it. Around this time a number of personnel left Relic and set up Blackbird Interactive. In 2010 Blackbird began developing Hardware: Shipbreakers, a spiritual prequel to Homeworld using much of the same art style, music style and even voice actors and fonts. Blackbird apparently hoped to turn the game into a Homeworld prequel early on, and made approaches to THQ which were apparently ignored. They continued development of the game as a separate and new IP.

Earlier this year, THQ went bust and its assets were sold off. Relic were sold to Sega whilst Gearbox, best-known for creating the Brothers in Arms and Borderlands franchises, bought the Homeworld IP rights. Blackbird had made an offer for the IP but it was too low. After the sale Blackbird congratulated Gearbox and worked with them to recover the assets to the Homeworld games to allow them to be re-released. With two new games in development for next-gen systems and no expertise in the RTS genre, Gearbox realised they needed some expertise to make a new Homeworld game and entered negotiations with Blackbird. The deal was signed live on-stage at PAX Dev last month. As well as publishing the new game and allowing it to be set in the Homeworld universe, Gearbox will co-fund and help publish the game.

Hardware: Shipbreakers was formerly set on a desert planet called LM-27 and saw a number of mercenary groups competing to loot crashed spaceships from the planet's surface. It was originally a free-to-play, multiplayer-focused game, but Blackbird had hinted that there would be a narrative. A gameplay footage demo released earlier this year showed some of this and also demonstrated the game's very Homeworld-esque aesthetics in action.

The transition into being a Homeworld game seems to be pretty straightforward. LM-27 will probably now become Kharak, the desert planet the Hiigarans have been exiled to, and it's likely the game will now focus on different kiith (clans/ethnic groups) fighting one another for resources. Whether these will remain the many crashed spaceships of Hardware remains to be seen. It is likely that the new game will culminate in the discovery of the Khar-Toba and the Hyperspace Core that leads to the construction of the Mothership in the original Homeworld. I also suspect that, if successful, a 'proper' Homeworld 3 will follow at a later date.

This is excellent news, though some elements need to be clarified. In particular, if the free-to-play, multiplayer aspect which was extremely lukewarmly received will now be joined by a proper single-player campaign (the previous core of the Homeworld experience).
Posted by Adam Whitehead at 17:58