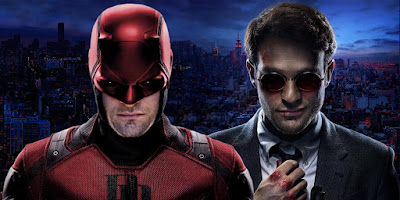 The news comes after the cancellation of two of Daredevil's spin-offs, Luke Cage and Iron Fist, both after two seasons apiece, and despite the fact that Daredevil's third season (released last month) achieved greater critical acclaim and buzz than any Marvel Netflix show since the first season of Jessica Jones. This seemingly confirms that Disney (who own Marvel) is clearing house of the shows and pulling them to avoid any competition for their new Disney+ streaming service, which will launch in late 2019 with several live-action Marvel shows slated to join the service.

Daredevil's first season launched the Marvel/Netflix collaboration back in 2015 with one of Netflix's highest-ever rated shows, which was widely regarded as one of the then-fledgling streaming service's main attractions (alongside Orange is the New Black and House of Cards) to convince people to sign up. No less than four spin-offs followed - Jessica Jones, Luke Cage, Iron Fist and The Punisher - as well as a team-up show, The Defenders, which ran for a single mini-series in 2017. The Marvel/Netflix universe initially did very well, with the number of viewers apparently peaking in the first season of Luke Cage (which managed to briefly shut down Netflix altogether as too many people were trying to watch it simultaneously). However, the total amount of viewership per season has apparently dropped significantly since then. The critical buzz surrounding the shows has also cooled. Both of these trends reversed with Daredevil Season 3, but apparently not enough to help save the show.

Marvel and Netflix's formerly cosy relationship has been strained by Disney's announcement of Disney+, a new streaming service which will launch next year with two Marvel mini-series, one starring Tom Hiddleston as Loki and another starring Anthony Mackie and Sebastian Stan as Falcon and Winter Soldier. Both series will be directly produced by the team that makes the Marvel movies and will see feature film actors directly reprising their roles. Talks are also continuing for a third series focusing on the character of Scarlet Witch, starring Elizabeth Olsen. Disney+ will also feature the first-ever Star Wars live action TV series, with Pedro Pascal to star in an ongoing series called The Mandalorian whilst Diego Luna is reprising his role as morally flexible Rebel intelligence agent Cassian Andor for a Rogue One prequel series.

Whilst Netflix has met the challenge of competition from Amazon Prime Video and CBS All Access with equanimity, they regard Disney+ and Disney's acquisition of Hulu as much more dangerous competition, due to Disney's much healthier finances (Netflix is still funding its original programming through debt, whilst Disney has profit to burn), a distinct lack of buzz around Netflix's recent shows (they arguably haven't had a really big crossover, must-watch hit since the second season of Stranger Things) and the dramatically slowing uptake of the Netflix service, particularly in the US and Europe. The loss of two of Netflix's flagship shows, Orange is the New Black and House of Cards, is also a major problem, arguably leaving Stranger Things (which will return for a third season in 2019) as their sole big, must-see show.

Marvel have put the dagger in even further in their announcement today, confirming that the Daredevil character - but not necessarily the actor, Charlie Cox - will resurface in future MCU projects, suggesting a recasting of the character and his promotion to the movies for Marvel Phase 4 (which will reportedly focus on lesser-known Marvel characters, and could potentially include other characters from the Marvel Netflix universe as well). It also sounds like Disney want to consolidate their Marvel branding into one, family-friendly tone which the adult, violent Netflix shows were fundamentally incompatible with.

With this news, it is now inevitable that the third season of Jessica Jones and the second season of The Punisher, which are expected in the spring and summer of 2019 respectively, will also be their last.
Posted by Adam Whitehead at 13:33

It's bye bye for Jessica Jones and The Punisher as well and I must say I totally understand where Netflix is coming from. It's only a matter of time before they lose the rights of these characters with the new streaming service from Mickey Mouse, so why should they keep help make these characters even bigger for their competitor? I'm sad to see the show getting cancelled as I thought season 3 was good (outside the ending) but I totally understand why Netflix did it.

Who wants to see a family friendly Daredevil, Punisher, Jessica Jones etc? In 1983, the Disney brand was perceived as too bland for adults so they developed Touchstone Pictures to make films with more mature and darker themes. We got Down and Out in Beverley Hills, Good Morning Vietnam, Dead Poets Society, The Colour of Money, Pretty Woman right up to Lincoln and Bridge of Spies. A shame they can't go back to that model and produce adult and family films. - Ian

It was the best marvel tv series.