Stan Lee, the creative powerhouse behind Marvel Comics and the creator or co-creator of most of its most iconic characters, has died at the age of 95. 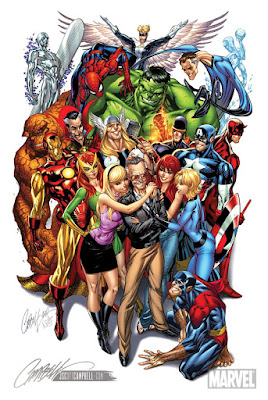 Born Stanley Lieber in New York City in 1922 and raised in the Bronx, he started working for Timely Comics in 1939, at the age of just 16. He initially worked as a runner and general office dogsbody, whose first responsibility was making sure the artists' inkwells did not run dry. He made his writing debut with the text-filler story "Captain America Foils the Traitor's Revenge" in Captain America #3 (1941). He harboured ambitions of writing the Great American Novel, so decided to use a pseudonym for comics: Stan Lee. Lee moved up to writing actual comic strips shortly thereafter, but his comics career was put on hold when he entered the US Army in 1942, serving in the Signal Corps.

After the conclusion of WWII, Lee returned to Timely as interim editor and worked at the publisher throughout the 1950s. However, in the late 1950s Lee had become disillusioned with the form and considered switching careers. He was saved when DC Comics, who were undergoing a creative dip, abruptly switched gears and revived the superhero genre with titles such as The Flash and Justice League. Lee's boss at Atlas Comics, as Timely had become known, asked Lee to come up with a superhero team to compete. Lee was dubious but his wife Joan urged him to "take a risk" since he was planning to quit anyway. Lee responded immediately, co-creating (with artist Jack Kirby) The Fantastic Four, whose first issue debuted in November 1961, just after Atlas Comics was rebranded as Marvel. This was rapidly followed by The Incredible Hulk (May 1962), Thor (August 1962), Iron Man (March 1963), the X-Men (September 1963), Galactus and the Silver Surfer (March 1966) and Black Panther (July 1966). Working with artist Steve Ditko, Lee created Doctor Strange (July 1963) and, with Bill Everett, Daredevil (April 1964). Lee also successfully resurrected characters from Timely's heyday, including Sub-Mariner and Captain America. In September 1963 Lee teamed up several of his characters as a supergroup called The Avengers.

In the midst of this period, Lee and Ditko created what would be their most popular and enduring character: in August 1962 they debuted Spider-Man in Amazing Fantasy #15. The character was so popular and immediately iconic that he quickly got his own title, and was soon as well-known and famous as Batman and Superman. Lee's approach was to give his characters relatable lives, with them getting into trouble at school, having problems with their parents and having relationship problems, which young people could relate to, unlike the remote and less-relatable Batman and Superman. Marvel Comics also cultivated a rock and roll underground image, making them far "cooler" than stuffy DC. Marvel also had a friendlier, more informal image, encouraging fans to write to "Stan" rather than "the Editor" and sharing stories from the office to make fans feel part of the creative process. By the start of the 1970s, Marvel had overtaken DC and become an impressive creative powerhouse for both Lee's characters and those of other writers.

Lee's fecund imagination outstripped the time available to actually write the comic scripts, so he collaborated closely with the artists, who often came up with important characteristics of the characters and made important storytelling decisions through the art, with Lee coming in after the artwork was complete to add dialogue. Lee innovated by introducing detailed credit panels, making sure that the writer, editor, artist, inker and letterer for each story was clearly identified.


Lee took on the Comics Code Authority in 1971, a regular for comics which Marvel had run afoul of several times for its content. The story that caused the situation to blow up was a Spider-Man narrative in which a friend of Peter Parker's becomes addicted to pills. The story had a strong anti-drugs message, but the CCA refused to approve the story. Lee published anyway. The resulting strong sales made the CCA all but irrelevant, paving the way for the darker, edgier and more adult comics of the 1980s.

Lee's last major creations for Marvel, alongside Gene Colan, were Captain Marvel (December 1967) and Falcon (September 1969), the first African-American superhero. Following the comics code kerfuffle, Lee retired from active comics writing to focus on publisher and also on moving Marvel into film, although he did occasionally return to pen the odd issue.

Lee stopped working on the comics side of Marvel altogether in the 1990s, following Hollywood projects which had resulted in a solid Incredible Hulk series but disappointing versions of Captain America, Thor and Spider-Man. The TV movie The Trial of the Incredible Hulk (1989) was the first time that Lee appeared in a cameo role in a Marvel movie or TV show. In 1995 he had a significant role playing himself in Kevin Smith's movie Mallrats, using superhero stories to help advise on the protagonists' terrible love lives. It was in the first X-Men movie (2000) that the tradition of giving Lee a cameo in every Marvel-related project began, with Lee going on to appear in almost every Marvel movie and TV show put onto film.

It may have taken a while, but Marvel Comics finally hit the big time at the cinema with Blade (1998), followed by X-Men (2000) and then Spider-Man (2002), each film launching a successful movie series. Fantastic Four (2005) was less successful, but it was the arrival of Iron Man (2008) that had the biggest impact, kick-starting the Marvel Cinematic Universe. To date, the MCU has produced twenty movies collectively grossing more than $17.5 billion at the box office and more in video game and television spin-offs.

Lee's life was not without controversy. Jack Kirby disputed Lee's role in the creation of some of their most iconic characters and bristled at the tendency for Lee to hog the limelight and drown out the contributions of the artists. Lee was also engaged in multiple lawsuits over character copyrights and attributions, although most of these were eventually resolved.

Stan Lee was, arguably, one of the most influential and impactful writers of the second half of the 20th Century, challenged for that mantle only by George Lucas, J.R.R. Tolkien and Stephen King (and, depending on how you count it, J.K. Rowling). His incredible decade-long creative explosion at Marvel Comics resulted in the creation of dozens and dozens of the most iconic characters ever seen in the field of graphic novels, who have more recently switched to cinema and television, with the Marvel Cinematic Universe being the most successful and dominant movie franchise of the early 21st Century. Lee, alongside a collaborative group of exceptional artists, shifted the perception of comics as an art form and paved the way for writers from Neil Gaiman to George R.R. Martin to Alan Moore.

A titan of the field of comics, with a body of work that is impossible to ignore, Stan Lee will be missed.
Posted by Adam Whitehead at 20:53

'Stan Lee was, arguably, one of the most influential and impactful writers ... challenged for that mantle only by George Lucas, J.R.R. Tolkien and Stephen King ...and... J.K. Rowling'

- extremely well said. And amazing when you think about it.

"...and Falcon (September 1969), the first African-American superhero." Wait WHAT? Either you got the dates mixed up or are you telling me Black Panther in 1966 wasn't originally even black???

Wert, when you wrote that Lee "shifted the perception of comics as an art form and paved the way for writers", why did you mention GRRM?
I'm not especially well-read in comics/graphic novels but am aware of Sandman (Gaiman) and various Moore works because of their movie adaptations (V for Vendetta, From Hell, League of Extraordinary Gentlemen).
Did Martin ever work in the comics field?

Martin's first-ever published work was a letter in Fantastic Four. Marvel was his first fandom, he attended the first Comic-Con in NYC in the 1960s and he started out writing comic stories in fanzines before he switched to prose. He's often said that Marvel was his introduction to fandom, to a lot of genre fiction, and of course it inspired WILD CARDS.

Ah, OK. I wasn't aware of that early phase of Martin's activity.
Thanks for letting me know - and merry Christmas.