Pedro Pascal has been cast in the lead role of the first-ever Star Wars live-action TV series, The Mandalorian. Pascal is a Chilean-American actor who first debuted on American TV in 1999 (most notably playing a vampire in a fourth season episode of Buffy the Vampire Slayer). He hit the big time in 2014 when he was cast as Oberyn Martell, the Red Viper of Dorne, in HBO's Game of Thrones. Off the back of that role he was cast as police detective Javier Pena in Netflix's Narcos. He played the role in the first three seasons of the series, attracting critical acclaim.

Pascal is set to play a Mandalorian warrior in the new TV series, which is set seven years after the events of Return of the Jedi and twenty-three years before the events of The Force Awakens. Not much else is known about the series, although early set photographs suggest that the action will partially take place on a desert planet with architecture highly reminiscent of Tatooine. 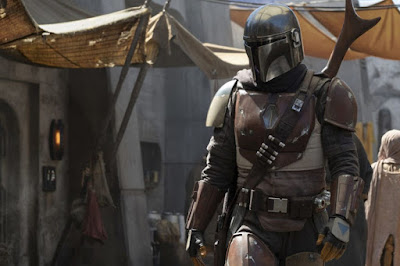 Reportedly Pascal has not yet started shooting, although publicity images have already been released showing a Mandalorian warrior on set. Presumably this was done with a stand-in either for early shooting or expressly for publicity purposes.

Iron Man director Jon Favreau is writing and producing the first season with The Clone Wars and Rebels writer-producer Dave Filoni lending a hand (and directing the first episode).

The Mandalorian will debut on the new streaming service Disney+, probably in the latter part of 2019. Lucasfilm are also planning a prequel mini-series to the film Rogue One, with Diego Luna set to reprise his role of Cassian Andor from that film.
Posted by Adam Whitehead at 20:09