The nascent Rebel Alliance has failed in its operation to liberate Lothal and has been forced to retreat to its new base on Yavin IV. General Syndulla's rebel cell remains committed to liberating both Sabine Wren and Ezra Bridger's homeworlds, but manpower and resources remain in short supply. Despite the apparently overwhelming might of the Empire, Ezra is determined to save his planet no matter the cost. 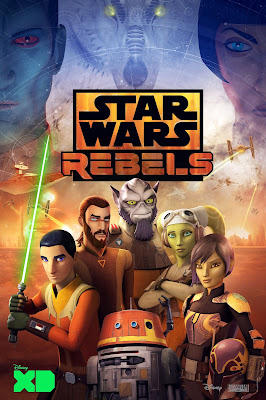 After four seasons and 75 episodes, Star Wars: Rebels has come to an end. The second Star Wars animated series produced under the auspices of Dave Filoni (after the well-received Clone Wars), Rebels holds the distinction of being the first piece of visual media released for the new Star Wars canon (preceding the release of The Force Awakens by a year) and also, arguably, the most consistently critically well-received part of it.

Season 4 opens with our heroes at a low ebb, having failed to retake Lothal but now motivated more strongly to help Sabine free her home planet of Mandalore. The first arc of the series focuses on Mandalore before the action moves back to Lothal, now a planet under brutal occupation with the Empire more blatantly engaged in strip-mining the world of its resources. Everything seems lost, but over the last few years Ezra has built up a large number of allies, people who owe him a favour and some unusual tricks with the Force, and now calls on every one of them to help free his world.

It's a stirring, classic Star Wars narrative, full of against-the-odds heroism, sacrifice, pulp adventure and pathos. Possibly alone out of the new-canon writers (barring maybe Lawrence Kasdan), Dave Filoni has found an excellent way of sticking to what makes Star Wars great, honouring its past and constantly coming up with new and fresh ideas to take the franchise into the future without burning down everything that went before it. The result is a genuinely interesting mix of familiar tropes and newer ideas, including the most comprehensive look at the Force and its questionable moral essentialism since the mighty Knights of the Old Republic II and Matt Stover's novels.

Being still primarily a kids' show (albeit one that adult Star Wars fans will get a lot of enjoyment from), the show doesn't get distracted too much by this stuff, but it's still good to see the universe getting fleshed out in greater depth. All of the characters get their moment to shine, especially Ezra as the mopey kid of the first season is now long gone, replaced by a mature and increasingly canny warrior who seems reluctant to fully embrace the ways of the Jedi but keen not to fall to the Dark Side either.

Continuity is also strongly pursued this season, as Filoni rounds off story arcs and character storylines stretching back to The Clone Wars. He doesn't get too self-indulgent in this, remembering that Rebels is primarily about its own cast of characters, but it's good to see long-standing storylines left dangling for many years finally wrapped up, sometimes tragically. But the focus is on our main cast of characters and the fact that they have to pass through the darkest moments possible before finding the light.

Complaints about this season are few. The awkward continuity of the show - which at one point has no less than three Light Side Force-users (technically not Jedi, but the distinction is thin) running around doing stuff for the Rebel Alliance less than a year before the events of A New Hope, but somehow no-one ever mentioned it to Luke - is still a bit unconvincing and the show's depiction of Grand Admiral Thrawn remains only a pale shadow of the Machiavellian, much more complex character of Timothy Zahn's novels. The "honourable rogue smuggler" archetype is also a bit worn out at this point, and having two such characters (Hondo and Vizago) playing major roles in the final season makes this a bit too obvious. Oh, and the loth-wolves becoming very major players in the final season comes a bit out of nowhere.

But beyond those minor issues, the fourth and final season of Star Wars: Rebels (****½) gives our band of heroes a worthy send-off and the hint that, some day, their adventures may continue (which sounds far-fetched until you realise a new Clone Wars series is indeed on the way). The season is available now in the UK (DVD, Blu-Ray) and USA (DVD, Blu-Ray).