"Good morning and welcome to the Black Mesa transit system."


On 19 November 1998, the course of video game history shifted. Half-Life, the first game by a brand new developer called Valve, was released to not just critical acclaim, but blanket critical awe. It changed the conversation over what players could expect from first-person video games in terms of immersion, narration, storytelling and AI. Almost every first-person shooter made in the last twenty years can trace its DNA back to the game.

Rewinding a bit, Valve was founded by Gabe Newell and Mike Harrington, former developers at Microsoft who'd cashed out with large bonuses in the mid-1990s and decided to create their own video game development studio. Impressed by games like Doom and the in-development Quake, they believed that 3D, first-person games were future and set about creating their own, assembling a disparate collection of coders, artists and level designers. They drew on the Doom modding scene, recruiting people who'd done great work in level design for the more primitive game engine.

They licenced the Quake engine from id Software and heavily modified it into GoldSrc, a considerably more sophisticated piece of software. Ideas for the actual content of the game fluctuated, and at several points the new team considered making two separate games: Quiver, a fast-paced action game where the player fought monsters; and Prospero, a moody, literate and story-focused game. With insufficient manpower to do both, Prospero was canned and the work folded into the Quiver game design, bringing on board more atmosphere and a stronger focused on narrative into the game. At this point the game was also renamed Half-Life.

When was first publicly shown at game fairs in 1997, gamers and publishers alike were astonished by the game's ambition, graphics and action, but the developers were dissatisfied, feeling they could do better. Astonishingly, at a time when games were frequently still designed, produced and shipped in a year, Valve decided to give the game an additional full twelve months of development time. 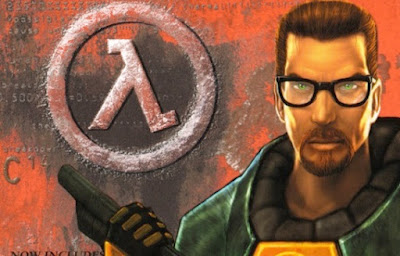 It was well worth it. On release, Half-Life was an instant smash hit, receiving critical acclaim and huge sales. Two well-received expansions followed, Opposing Force (1999) and Blue Shift (2001), along with a PlayStation 2 port of the game. Fans hungrily used the game's editor to create their own mods, including Team Fortress Classic, Counter-Strike, Day of Defeat and Gunman Chronicles (all good enough to be released as their own stand-alone products). And, of course, Valve took the lessons and profits from Half-Life to work on two more projects: the video game delivery system Steam, which launched in 2003 (and has been credited with arguably saving PC gaming altogether), and Half-Life 2 (2004), which garnered as much, if not more, critical acclaim as its forebear.

Going back to Half-Life, it's astonishing to remember that it came out only a few years after Doom, with its blocky graphics and awkward controls to look around. Half-Life was slick, intuitive and minimalist. It was a game that knew when to throw down a massive set-piece battle involving tons of aliens and soldiers, and when to isolate the player in a remote part of the Black Mesa facility with limited ammo and health, and absolutely no warning when aliens would attack. The game dished out its storyline and lore with skilful economy, avoiding infodumps and non-interactive cut scenes. By not giving the player-character, Gordon Freeman, a voice, they allowed the player full immersion in the game, able to project whatever personality they wanted onto the character.

The game was also long, taking a good 15 hours or so for a single play-through. Given that the game was really one massive super-level (divided into discrete chapters), it felt longer. You played the whole game in real-time, so when you staggered in the alien Nihilanth's lair, exhausted and determined to finish off the threat, it felt like a tremendously well-earned victory.

The DNA of Half-Life continues through the Call of Duty and Halo franchises, and more directly through the constantly-updated online games Counter-Strike: Global Offensive and Team Fortress 2. However, it has to be said that the linear, long, story-driven first-person shooter is not in a good place. Bethesda's Wolfenstein series is keeping the flag flying, but it's more the open world, first-person RPG franchises like Deus Ex and Fallout, and semi-open world games like Dishonored and Prey, which seem to be keeping the spirit of Half-Life alive.

As for the Half-Life universe itself, there's been no fresh entry in the core series since Half-Life 2: Episode Two (and its enormous cliffhanger ending) in 2007 and spin-off game Portal 2 in 2011. Valve occasionally pipe up to say the series will continue, but no-one really believes them any more.

A pity, but it should not detract from the fact that Half-Life was a terrific work of art and a blisteringly good game which is surprisingly still playable today (particularly via its remake, Black Mesa). Good job, Mr. Freeman.


ETA: As a special bonus, the Black Mesa team have released a trailer for Xen, the second part of their remake of the original Half-Life. It looks spectacular.
Posted by Adam Whitehead at 22:36

I didn't realize that Half-life came out the exact same week as Ocarina of Time. That's kind of insane, when you think about how massively influential and important both of those games were to 3D gaming in general and would shape the entire industry for years to come.

WWGFD: What Would Gordon Freeman Do?