Bethesda Game Studios are facing the most difficult game launch in their history, with sales of their latest Fallout game plummeting. Early release figures from the UK suggest a massive 82% drop compared to its predecessor. In addition the game has received a critical mauling from a gaming press normally all too willing to overlook their game's huge flaws in return for advertising revenue. 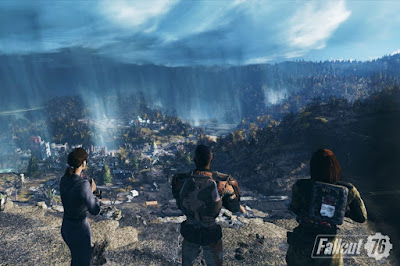 Bethesda Game Studios, the in-house development studio for Bethesda Softworks (itself part of ZeniMax), have been developing large, open-world and single-player focused RPGs in their Elder Scrolls fantasy series since 1992 and in their Fallout science fiction series since acquiring the rights from Interplay in 2004. Fallout 76 is the ninth game in the Fallout franchise and the first to have a predominantly multiplayer focus (and only the second to have any kind of multiplayer component at all).

Bethesda specialises in making large, open-world games where players create a character and follow an intricate storyline and a plethora of optional side-quests and activities, such as crafting new weapons, settlement-building or becoming merchant traders. This has proven immensely popular with gamers, especially since Bethesda abandoned their early, hardcore RPG focus in favour of a more approachable, mass-appeal style of game. This arguably began with The Elder Scrolls IV: Oblivion (2006) and continued through Fallout 3 (2008), The Elder Scrolls V: Skyrim (2011) and Fallout 4 (2015). Bethesda has outsourced other games, with Obsidian Entertainment developing Fallout: New Vegas (2010), a more hardcore and old-school RPG, and Zenimax Online Studios developing The Elder Scrolls Online (2014), a massively multiplayer online roleplaying game.

Fallout 76, however, has sold around 2 million copies worldwide so far, meaning it is inarguably Bethesda's worst-selling game since Morrowind, a fairly niche RPG from a then-still-obscure developer released only on PC (an X-Box port did follow in the US a month later, but not until many months later worldwide). As more figures come in, the sales may go over Oblivon's, but it won't be by much. Given Bethesda's AAA status and the massive brand awareness of both Bethesda as a publisher and Fallout as a franchise, this is a disaster.

Apart from Interplay's Brotherhood of Steel (2004), a PS2-only action side-game made whilst the company was collapsing, every Fallout game going right back to the start has sold significantly more than the one before it, a streak also ended by Fallout 76.

The reasons for the game's failure seem clear. The problem isn't that it's a multiplayer spin-off of the main series - so was The Elder Scrolls Online and that's done very well - but that it's trying to play to two audiences whilst meeting the expectations of neither.

Fallout is a series of large, open-world roleplaying games with lots of locations and things to explore. Fallout 76 leans into that with a very large map, four times the size of Fallout 4's, with a lot of location and variety in the landscape, based on West Virginia. However, the game also jettisons what people expect from a Bethesda roleplaying game. Apart from a couple of robots which give out desultory quests, there are no NPCs in the game at all. The only human characters you meet are fellow actual human players. Beyond that there are only monsters.

Also, because Fallout 76 is a prequel, taking place long before the events of even the original 1997 Fallout, almost none of the traditional Fallout lore is present: there are no Super Mutants*, Brotherhood of Steel*, Enclave, New California Republic etc. There are Vaults, Deathclaws, Pip-Boys and Power Armour, but not much beyond that.

All of this would be fine if the game did its core gameplay loop - teaming up with other players to take on enemies (either environmental, monsters or other humans) in battles - well. It fails to do so, with the series' clunky shooting in place once again, worsened by the removal of VATS, an automated, RPG-style targeting system the series has used to overcome the deficiencies in combat. In Fallout 3 and New Vegas, VATS paused the game and in Fallout 4 it slowed it down, but both are clearly impossible in a multiplayer game, so instead the game tries to make it work as a real-time mechanic and, erm, fails miserably.

This latter problem is also rooted in Bethesda's curious decision (which I will go into in a separate article) to continue using its GameBryo/Creation Engine (which they've used for every game since 2002's Morrowind) to make the game. When ZeniMax developed The Elder Scrolls Online, they tailor-made a brand new engine to run the game. For some reason, Bethesda didn't do that for Fallout 76, instead recycling and reusing their engine from Fallout 4 with only a few moderate changes.

On a more mechanical level, Bethesda also chose not to release Fallout 76 though traditional PC digital storefronts like Steam or GoG, which likely put off a lot of players already wary of having too many digital onlines and logins, and too many stores with their bank details. The game also launched quite soon after Red Dead Redemption 2, which shifted 17 million copies in its first week. An a massive, sprawling game it's likely many players are still making their way through that title and aren't interested in other games at the moment. Still, the fact that Fallout 76 was comprehensively outsold by a remake of a 20-year-old Spyro the Dragon game has got to hurt, and there will be recriminations going on at Bethesda HQ.

Most likely, Bethesda will say that Fallout 76 is an experimental side-game and was never meant to outsell its predecessors. This will be disingenuous in the extreme: Bethesda were clearly hoping to tap into the Fortnite/Overwatch/Call of Duty multiplayer audience and get similar levels of sales, and falling this far short can only be seen as a major failure at this point (although if the game is improved through future patches and content updates, this could theoretically change).

Whatever the root cause, Bethesda are facing their first big miss as a development studio in their history. Fortunately, given the studio's long tail on their older games, it probably won't hurt them in the long run. Their next game, Starfield, will be a standard Bethesda open-world, narratively-driven, single-player RPG. Bethesda's owners may be hoping it comes out in 2019 though, to try to make up for the issues with Fallout 76 as soon as possible.

* ETA: I am informed that Super Mutants and the Brotherhood are in Fallout 76, because when you're Bethesda who gives a toss about the established canon timeline?
Posted by Adam Whitehead at 12:25

It might be worth noting that F76 was developed mostly by Bethesda Development studio Austin, which isn't Bethesda proper but rather the bought and rebranded BattleCry studios.

The core development team has not been working on this since they are busy with Starfield.

Branding this as a Bethesda game was probably a mistake.

Super mutants are in the game.

Well, the story in Fallout 4 was so bad, maybe Bethesda thought they could improve on it by having no story at all. Also, as someone who won't buy Steam games where you have to log into more software, such as Ubisoft or Rockstar games, I'm even less inclined to buy a game that won't be on Steam at all.

Yeah, 9th. I was counting off my list of games to discuss in the series and forgot that one of the games was Van Buren (aka Original Fallout 3) which was never finished.

Oh and I just found that both Super Mutants AND the Brotherhood are in Fallout 76, despite this breaking all credulity for the game. FFS. Having people in Power Armour was fine, it was prewar, but most of the previous evidence was that the Brotherhood wasn't founded until after FO76 takes place. Bethesda's explanation is thin, and them saying, "Well, we don't give a toss what someone wrote 20 years ago," is weak.

Actually, I'm really enjoying FO76 -- and I rank Fallout 3 and NV among my favorite games of all time, so I'm the target audience. I'm glad I bought it, though I was bummed about it not being available on Steam, for the reasons mentioned in the article.