The expansionist Kingdom of Lether has subdued most of the rival kingdoms and tribes on its continent, establishing a hegemony built on notions of debt and service in the name of the king. Its eye now turns to the northern frontier, where the six tribes of the Tiste Edur have recently been united by the Warlock King of the Hiroth. A delegation sets forth to discuss peace and trade, but the true motives of the kingdom are baser. The Warlock King, aware of the growing threat, sends forth the Sengar brothers on a mission to recover a powerful item for him. When the wrong person finds the item, a sorcerous sword of alien origin, it changes the fate of a continent...and the world. 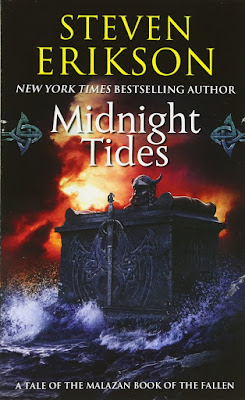 Steven Erikson's Malazan Book of the Fallen fantasy sequence is one that continuously delights in wrong-footing the reader. All of the tropes of established fantasy are here, with powerful empires, great battles, impressive magic and monstrous creatures in spades, but there's also intelligent musings on human nature, philosophical asides on the weirdness of existence and thematic explorations of ideas ranging from colonisation to capitalism and family.

The first four books in the series explored the Malazan Empire and its conquests on the continents of Seven Cities and Genabackis. Although each of the four novels had its own focus and conflicts, common threads regarding the fate of the Empire and the gods ran through each book. Midnight Tides, the fifth book, completely upends this structure altogether. We're now not only on the remote continent of Lether (located far to the south-east of Genabackis or south-west of Seven Cities and Quon Tali), but we're also back in time, with the events of this novel taking place some time before the events of Gardens of the Moon. In fact, you could read Midnight Tides as a stand-alone fantasy novel, as its connections to the rest of the series are, at this point anyway, slight.

Midnight Tides is more traditional, in some respects, than the earlier books in the series. We have two factions, the Tiste Edur and the Kingdom of Lether, with protagonists and antagonists in both camps. Our main POV character is Trull Sengar, a Tiste Edur warrior with a conscience who becomes increasingly concerned over what is happening to his people. Trull is also a link to the rest of the series, as we met Trull at a much later place in his life in House of Chains (and the conceit of the series is that the Tiste Edur storyline of Midnight Tides is being told by Trull to his companion Onrack, although this is not particularly clear - or important - in this novel itself). Other major characters include Udinaas, a Letherii slave who wins the favour of the Tiste Edur ruler; Tehol Beddict, apparently a whimsical madman living in the Letherii capital who is far more than he seems; his brother Brys, the King's Champion; Seren Padac, a traveller, scout and trade factor; and Bugg, Tehol's manservant. It's probably Erikson's most vivid cast assembled so far (which is really saying something) and perhaps his most relatable: with one exception (not made clear until the end of the book) these aren't demigods or Ascendants, but relatively ordinary people dealing in extraordinary circumstances.

Midnight Tides is an enormous book (over 900 pages in paperback) and one that is trying to do a hell of a lot. The primary storyline revolves around the clash between the Tiste Edur and Letherii, a clash of ideologies and beliefs as well as military force. The Letherii have been seen - perhaps too simplistically - as a stand-in for the United States or capitalism in general, a self-described "civilised" nation which destroys the environment, eradicates indigenous cultures and makes everyone subservient to the rule of money, where wealth is the only symbol of worth. The Tiste Edur are not shown as being inherently better (Erikson, an anthropologist and archaeologist, thankfully avoids the "noble savage" trope with some skill), particularly their tendency to take slaves and engage in ritual combat at merest hint of disrespect, but there is something to be said for their much more straightforward honesty compared to the two-faced cynicism of the Letherii. Standing outside this is the Crippled God (another link to the rest of the series), who decides to barge in and get involved to manipulate events for his own benefit. 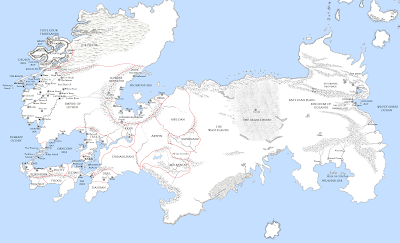 The result is a busy and (relatively) fast-paced book. Some of Erikson's more characteristic tics, such as characters stopping in the middle of a major battle to exchange philosophical one-liners, are present and correct, but there isn't really enough time for these to bog down the narrative, as is occasionally threatened in other volumes. Instead the book keeps building the tension and narrative layer by layer, chapter by chapter, as we rotate between the Tiste Edur frontier, events in Letheras and elsewhere.

Midnight Tides is also a bizarrely funny book. Of Erikson's numerous fantasy cities, Letheras is probably the closest to Pratchett's Ankh-Morpork, with its subsidence problems and slightly preposterous murder rate. The comic elements come to the fore in the story of Tehol and Bugg, as Tehol realises the only way to really destroy Lether is from inside its banking system, and the (apparently) hapless Bugg helps him to this end. Cue lots of financial skulduggery, plans-within-plans, political intrigue and the increasingly unpleasant details of Tehol's diet and wardrobe emerge. Given the story can get quite grim elsewhere, the laughs in this storyline come as a welcome relief. That's not to say that Tehol's story is disposable - very far from it - but it allows for some well-handled tonal variance.

The book does falter with a slightly redundant storyline in which one of the female characters suffers a sexual assault during a battle. Erikson already covered this story in Deadhouse Gates and did a sterling job of it, presenting the ramifications of physical and sexual abuse on a character in a realistic manner that was well-explored and informed the story without it feeling exploitative. Here the story point is handled very briefly, written off quite quickly (with magic used to take away the psychological damage) and feels almost entirely redundant to both the story and character. Erikson is one of the egalitarian of fantasy authors with well-realised male and female characters, so this feels like a (fortunately) rare misstep on this score (the last in the series until Dust of Dreams) rather than a major problem, but it's still a regrettable move.

Beyond that, the book's biggest weakness might be its awkward placement in the series: Midnight Tides sets up the events of The Bonehunters (where the events of this novel come into conflict with the wider Malazan world) and, most especially, Reaper's Gale, and several of its story threads continue into those books. For that reason, I'd hesitate to recommend reading Midnight Tides by itself (as the sequels won't make any sense unless you've read the first four books as well, and if you read this book you'd then have to double-back and read the other books before being able to press on with the sequels) despite it's stand-alone feel.

Midnight Tides (****½) isn't quite up to the standards of the best volumes in the series, Deadhouse Gates and Memories of Ice, but it isn't far off. It's an epic fantasy novel with heart and brains, an intelligent deconstruction of capitalist ideology but also an action-packed war story with philosophical musings. It is available now in the UK and USA.
Posted by Adam Whitehead at 16:07

Email ThisBlogThis!Share to TwitterShare to FacebookShare to Pinterest
Labels: midnight tides, steven erikson, the malazan book of the fallen

This is the book that killed my interest in Erikson. It was the juvenile 'comedic' references to some character who allegedly had a big dick that turned me against it. And if you lose the thread on one book, the rest become too confusing to follow (who is this character? God, Ascendant or mortal? What time period and/or location are we in? Is this another Bridgeburner? Weren't they almost all wiped out in the first book, in the first few pages....???? etc etc etc)

The time period and location are really pretty clear to me...
Loved this book, almost as much as DG and MOI.

I saw in a recent interview that Erikson intended Lether to be the British Empire, not the US, although he acknowledged the similarities (and even compared the Tiste Edur to Native Americans in the US).