The Stone Sky by N.K. Jemisin

The world is reeling under the advent of a new Fifth Season, one that threatens to destroy civilisation altogether. Essun and her daughter Nassun are both aware that the return of the long-lost Moon may help resolve the crisis, but their goals are diametrically opposed. With Essun's community recovering from a brutal military confrontation and Nassun's mentor critically ill, both will have to overcome great obstacles to reach their goal...and each other. 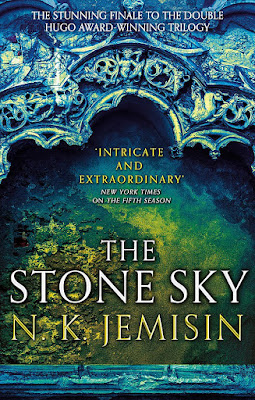 Concluding a trilogy when the first two volumes have been acclaimed as the finest fantasy novels of the decade, won a multitude of awards and been optioned for television is a bit of an undertaking, but one that N.K. Jemisin has pulled off with an aplomb. The Stone Sky concludes the Broken Earth trilogy, a post-apocalyptic fantasy of the "Dying Earth" school, set in the far future when the world has become a stranger place where the lines between sorcery, magic and science have become blurred by tens of thousands of years of progress.

The previous volume in the series, The Obelisk Gate, left our characters in difficult predicaments. The Stone Sky soon sets them on their way to a final confrontation where the fate of the world will be decided. So far, so standard. But The Stone Sky isn't your standard fantasy novel. The final confrontation is a clash of ideas and perspectives informed by the well-developed characters and their experiences, not a rote clash of armies (which arguably we got in The Obelisk Gate anyway).

Instead, The Stone Sky is a surprisingly quiet novel. The principle action unfolds through conversations between the characters and through lengthy flashback sequences revealing how the Earth lost the Moon in the first place and how the highly advanced civilisation which caused the Shattering fell from grace. Woven through this is a theme of intolerance: the orogenes of the present-day story being outcast and persecuted for being Other, but also used for their power. This is echoed by events in the flashback story, where entire races are enslaved and persecuted out of fear, but then used for their power.

The Stone Sky, as with the rest of the trilogy, explores powerful themes of disempowerment, slavery and fear of the unknown, but also wraps an interesting and gripping narrative, all built on some very accomplished worldbuilding. This mix of atmosphere, character, theme and story is excellently-handled and recalls the best work of Ursula K. Le Guin: a book where all of the individual pieces that went into making it complement one another and deliver a novel that is far more than the some of its parts.

The novel is not quite perfect. Like The Obelisk Gate, the pace sags on occasion and this is made more noticeable by the lengthy flashbacks to the Shattering. These flashbacks are interesting and beautifully-written, but only reveal a moderate amount of new information not previously given in dialogue. The book isn't quite the equal of The Fifth Season in its pacing and story structure, although the difference is not too egregious.

Overall, The Stone Sky (****½) ends one of the finest fantasy series of recent years in final form, wrong-footing expectations and building on the accomplishments of the first two books in the series. It is available now in the UK and USA.
Posted by Adam Whitehead at 14:12