N.K. Jemisin has sold over a million copies of her novels, as Orbit Books have announced via the following helpful infographic. 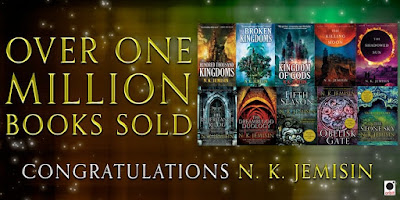 Jemisin published her first novel, The Hundred Thousand Kingdoms, in 2010. Since then she was published an additional seven novels and multiple short stories and novellas. She has won three Hugo Awards (including a record-breaking three in a row for Best Novel for all three books in her Broken Earth trilogy), two Locus Awards and a Nebula in her career so far, which is still in its early stages. It'll be interesting to see what comes next.
Posted by Adam Whitehead at 22:52

Loving this series. The first book is the strongest but goddamn, overall, it's been a treat. So very happy to have discovered someone as talented as her.

Cannot wait to see what else she blesses us with!