Jeff Winger's renewed legal career has crashed and burned, leading him reluctantly back to Greendale Community College and a new job. He reconnects with old friends and faces new challenges. 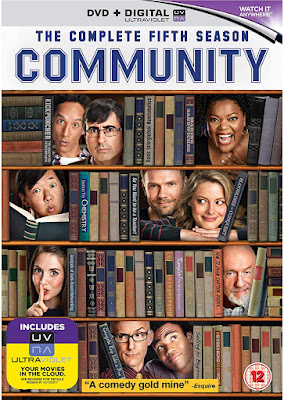 Community was a sitcom which fused pop culture references, metacommentary on the show's own fictional nature and biting humour, all elements brought to the table by its creator and chief writer, Dan Harmon. Due to behind-the-scenes politics and a clash between Harmon and actor Chevy Chase, Harmon was fired from the show between Seasons 3 and 4, and a new showrunning team brought on board. The resulting fourth season, although not a total disaster, was found to be lacking compared to the previous years. With Chase departing, Harmon was reinstated for the final two seasons.

Season 5 is an immediate improvement over its forebear. The high concepts are back, such as a completely animated episode which sees the regular characters joining G.I. Joe and a "Floor is Lava" game that gets completely out of hand. These are fun and amusing, with the stories and actors clearly reinvigorated by Harmon's return and Chase's departure (most of the cast agree that Chase could be a toxic presence on set).

However, the show struggles with a much bigger mid-season change: the departure of Donald Glover as Troy Barnes. Troy is one of the most consistently funny characters on the show and is also arguably its heart, with the Troy-Abed relationship being the cornerstone of the series. Glover's departure leaves a gap that the show can't quite fill, despite a spirited attempt to team up Abed with Annie instead.

Other changes are more successful: after a two-season absence, John Oliver returns as Professor Duncan and immediately re-injects his brand of snarky humour back into the series, whilst Jonathan Banks (Breaking Bad) is phenomenal as Professor Hickey. A second Dungeons and Dragons episode may be a little self-derivative, but it works well, and the season-long arc about finding a way of saving Greendale is reasonably successful.

The fifth season of Community (****) restores some of the zest and energy lost in the fourth, but the departure of Troy and the near-immediate reduction in character of Abed is a sign that perhaps the show has suffered too many cast departures to remain viable. It is available now in the UK and USA.
Posted by Adam Whitehead at 10:59

"A second Dungeons and Dragons episode may be a little self-derivative, but it works well, and..." incomplete review?

"A second Dungeons and Dragons episode may be a little self-derivative, but it works well, and"

That was weird. Fixed.