I attended George R.R. Martin's talk in London last night and tweeted about some of the things he said, which, as is Twitter's wont, some people misinterpreted or misunderstood, so I thought it might be useful to clarify and expand on these points here. 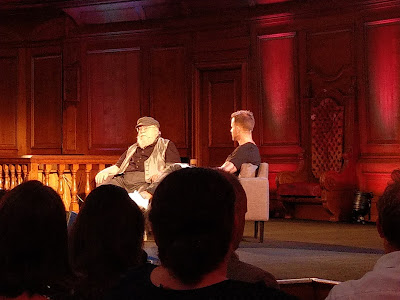 The evening started with George being surprised by bigwigs from Nielsen, who gave him two special awards for sales of A Song of Ice and Fire in the UK, confirming that A Game of Thrones and A Clash of Kings have individually sold over 1 million copies each in the UK since the UK Nielsen Bookscan started in 2001. Given the UK's much smaller market than the US, that's a huge sales achievement.

Most of the interview (with historian Dan Jones) was standard stuff we've heard many times before: George's early career in short stories, working in television (bearing in mind we were in a church, it was surprising that George got so wound up by reminiscing over producers messing with his scripts that he dropped a couple of f-bombs), writing Avalon and getting the inspiration for Bran's first chapter etc.

George did expand on the writing of The Hedge Knight. Robert Silverberg got a ton of money to do Legends, an all-star anthology of the biggest names in fantasy. He'd recruited people like Terry Pratchett, Stephen King and Robert Jordan. Initially GRRM thought that he wasn't established enough in epic fantasy to contribute (as only A Game of Thrones had come out and he was deep in the writing of A Clash of Kings) but the money on offer was large and it was pointed out he'd get a good cross-pollination from other authors' fanbases reading his story and deciding to check out AGoT. George realised he couldn't write anything set during the series so did a prequel. When it was nearly done, George got a message from Silverberg telling him he'd heard that ACoK was going to be late and Legends couldn't be late for the marketing push it had been allocated, so Silverberg was going to drop George's story and had already commissioned a replacement. George ended up delivering his story on deadline, before several of the other authors had delivered theirs. That's why Legends has 11 stories rather than a more logical 10. George credits The Hedge Knight with helping massively boost the popularity of ASoIaF as a whole, as there was a very sharp increase in sales for ACoK compared to AGoT.

George noted that he had identified 12 possible stories/episodes from Dunk & Egg's life that could be expanded into short stories, including the 3 already published, so that's 9 potential further stories for the duo. From previous interviews we know that the next two - The She-Wolves and The Village Hero (both working titles) - are planned in some depth and The She-Wolves is partially or even mostly written, but GRRM wasn't sure what order to publish them in. Both are on hold until The Winds of Winter is done.

The first Game of Thrones spin-off TV show is still officially unnamed: Bloodmoon sounds like a codename (or - my supposition - the name of the pilot episode) and George still wants The Long Night (or, from another interview, The Longest Night). The pilot has finished filming and HBO will mull it over before pulling the trigger (or not) on a season order in a few months.

GRRM also repeated that the inspiration for the Red Wedding was the Black Dinner of Scottish history, in particular the more "colourful" account that the doomed clan leaders were serenaded with a death march song and had a black boar's head (the symbol of death) served to them at dinner before their execution, which most historians now seem to believe was a total fabrication ("But it sounded better"). His Red Wedding was the Black Dinner "turned up to 11" but the TV version was "turned up to 14."

Also a reiteration that Fire and Blood wasn't supposed to exist, it was supposed to be his contribution to The World of Ice and Fire in the form of sidebars that he wrote shortly after finishing A Dance with Dragons, but instead of 3,000 words he ended up submitting over 170,000 words (in earlier interviews he said closer to 300,000, but I wonder if the 170,000 is specifically the information on the Targaryens and the 300,000 includes all the info he contributed on the Empire of the Dawn, Iron Island history, etc, i.e. everything else in the book), as it had just all poured out of him in a few weeks (way back in the day he said it was around 2-3 months). His publishers were horrified, as it made World of Ice and Fire too big to be publishable. His co-writers Elio Garcia and Linda Antonsson compressed almost all of it down and summarised it to fit into the book, leaving George with this big manuscript which he then chopped up to produce the three anthology stories (Princess and the Queen, The Rogue Prince and Sons of the Dragon). The motivation to publish Fire and Blood came when HBO started talking about prequel spin-offs and George realised the manuscript could be a potential source of new stories and information, although ironically the one HBO decided to proceed with had nothing to do with the Fire and Blood material.

Fire and Blood II is planned out - GRRM is relishing the chance to tell the story of Aegon IV and his mistresses - but not yet written, and can't be published until after ASoIaF as a whole is completed.

George did talk about his schedule in terms of the order of things he wants to publish things in. No dates were mentioned and the order sounded aspirational rather than set in stone:
There will also be more Dunk & Egg short stories after the fifth one. As mentioned before he has twelve potential story ideas mapped out which will span their lives. He didn't mention Summerhall or how it would work scheduling the D&E stories versus F&B2, as presumably one of them will spoil Summerhall for the other, as his "constructive vagueness" over the events from World of Ice and Fire presumably won't fly again.

The schedule may sound "ambitious" given the long wait between ASoIaF volumes and indeed D&E stories, but if was suppose The Winds of Winter is closer to being done than not, take on board that The She-Wolves is mostly done and he effectively wrote Fire & Blood I in a few months, then the only question mark is really on ADoS, how fast it can be done and if it's really going to be the last book in the series. None of these questions came up, so I guess time will only tell on those.

George rounded off the interview by saying his favourite dragon in the series is Balerion, the Black Dread, and his favourite sword is Dawn, and dropped a hint that there is something unusual about the sword as it is forged from a meteorite.
Posted by Adam Whitehead at 13:58

Email ThisBlogThis!Share to TwitterShare to FacebookShare to Pinterest
Labels: a song of ice and fire, fire and blood, george r.r. martin, news, the winds of winter

Thanks for the tweets and clarifications

This is super interesting! I thought I read somewhere that he wrote so much material for Fire and Blood that it wouldn't all fit; they somewhat arbitrarily ended it where they did, and decided to save the rest for a follow-up volume. So perhaps there's a lot of it already written. (A girl can dream.)