DUNGEONS & DRAGONS movie gets yet another creative shake-up

The Dungeons and Dragons film has, once again, had a creative reshuffle. Chris McKay (The Lego Movie, The Lego Batman Movie) - who himself had replaced Rob Letterman - had been tapped to write and direct but has moved on to Ghost Draft, a Chris Pratt vehicle. Jonathan Goldstein and John Francis Daley have now been tapped to direct. 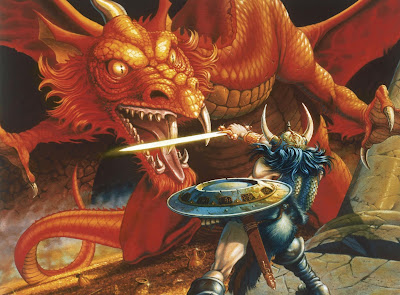 Michael Gillio (no writing credits of note) has revised an earlier script by David Leslie Johnson-McGoldrick (Orphan, Wrath of the Titans, Aquaman), but it's likely that Goldstein and Daley will revise the script further.

The Dungeons and Dragons movie has a planned release date of 23 July 2021. Reportedly early discussions have been undertaken with Ansel Elgort (The Fault in Our Stars, Baby Driver) to star. It remains to be seen if this creative team stick, although it remains concerning that the writers and directors of kids' movies and comedies keep being attached to the project, rather than dramatic writers with a regard for the source material. Given that D&D has arguably never been hotter and more popular than it is now, it's baffling why the project seems to keep stalling.
Posted by Adam Whitehead at 11:50