Viacom, the owners of Paramount Pictures, and CBS have completed their long-mooted re-merger. Amongst many other interesting side-effects (such as giving Paramount and their Hasbro master-partnership access to a new streaming TV service via CBS All Access), it means that the entire Star Trek franchise is once again reunited under one banner. 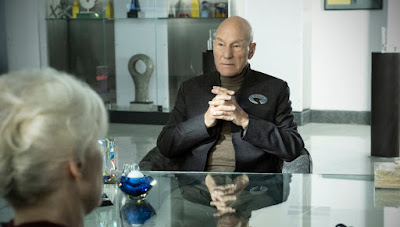 To back up, the original Star Trek was produced by Desilu Studios and aired on NBC. In 1967, during Star Trek's second season, Desilu was purchased by Paramount. Paramount produced the rest of the series, the animated series and all of the movies based on the property to date, from Star Trek: The Motion Picture (1979) through Star Trek Beyond (2016). Paramount's TV division also produced Star Trek: The Next Generation (1987-94), Deep Space Nine (1993-99), Voyager (1995-2001) and Enterprise (2001-05).

In 2005, just as Enterprise was ending, Paramount's owners Viacom decided to divest their television arm as it was losing a serious amount of money. The television arm, effectively the old Paramount Television and CBS, became the new CBS, whilst Viacom retained ownership of Paramount. Due to arcane back-room wrangling, this involved splitting Star Trek: the movies remained the property of Viacom and Paramount, and the TV shows ended up with CBS. This is why CBS was behind the remastering of both the original series and The Next Generation, despite not having anything to do the franchise originally.

This division became problematic as both companies began producing new Star Trek material, Paramount via its movie collaboration with J.J. Abrams which gave us Star Trek (2009), Into Darkness (2013) and the aforementioned Beyond; and CBS with Star Trek: Discovery (2017-present) and its forthcoming spin-offs Picard and Section 31, all on its unexpectedly successful CBS All Access streaming service.

The division created legal uncertainties over the ability of each company to use ship designs, music and footage from other media, and meant that the writing team under Alex Kurtzman had to tread carefully when referencing events from the films in the TV shows (particularly the destruction of Romulus in the 2009 Star Trek movie in their new Picard show). The re-merger means that all such legal uncertainties are now removed and there can now be much greater integration between the TV shows and any new films going forwards, such as Quentin Tarantino's much-discussed potential film project.

What this means going forwards - a Discovery movie or an Abramsverse TV show both seem unlikely at this point - is probably not too much of a change in how the franchise operates, but it does clear up some potential grey areas.
Posted by Adam Whitehead at 22:03

I bet one of the things that might've been different if the two halves hadn't been separate at the time was the design of the Discovery Klingons, after the Abrams movies had already revamped but had little opportunity to use them.