The John W. Campbell Award for Best New Writer to be renamed

The John W. Campbell Award for Best New Writer, which recognises fresh and new talent in the science fiction and fantasy field, is to be renamed following concerns raised about the name. 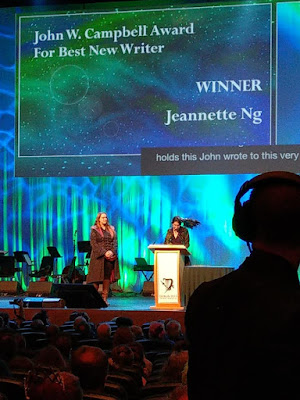 The award is sponsored by Dell Magazines, who publish Analog, the magazine that Campbell rose to fame for editing (under the title Astounding, until he changed it in 1960). Campbell was a famed writer and editor, arguably best-known in fiction for his story "Who Goes There?" which has been adapted to film as The Thing From Another World (1951) and The Thing (1982). However, he was also a controversial figure in his own lifetime for his views on race, slavery and pseudoscience, which caused him to sometimes fall out with close friends including Isaac Asimov, whose career he had helped nurture. Campbell's view that slavery was a natural tenet of mankind and his refusal to publish stories with black protagonists caused significant friction in his own lifetime.

The John W. Campbell Award was introduced in 1973, two years after Campbell's death, and was meant to champion new talent in SF&F. Anyone who had published a debut work of SF or fantasy within two years of the award date was eligible, no matter the medium. The award was sponsored by the publishers of Analog but it was organised and voted on as part of the annual Hugo Awards, held every year at the World Science Fiction Convention (WorldCon). The very first winner of the Campbell was Jerry Pournelle. Later winners included Lisa Tuttle, C.J. Cherryh, Stephen Donaldson, Ted Chiang, Elizabeth Bear, John Scalzi, Naomi Novik and Wesley Chu.

The debate about the name was revived by this year's Hong Kong-born winner, Jeanette Ng, who pointed out in her awards acceptance speech that Campbell would have been highly unlikely to publish or appreciate her fiction, and she felt the award continuing to be given in his name was wrong. This has sparked a debate for the past few days amongst SFF fans and critics.

The publishers have responded by confirming that from 2020 (where the award will be given in Wellington, New Zealand), the award will be renamed the Astounding Award for Best New Writer, to commemorate the influence and impact of the magazine on the field of SF and fantasy.

The John W. Campbell Memorial Award for Best Novel, an unrelated award, is awarded annually by the Centre for the Study of Science Fiction at the University of Kansas. There is no indication that they are also considering changing their name.
Posted by Adam Whitehead at 20:21