3 March 1952. A sizeable meteorite crashes into Chesapeake Bay, obliterating most of the Eastern Seaboard of the United States. As the USA reels from the disaster, which kills millions, the resulting ecological damage threatens to start a runaway greenhouse effect which will make the planet uninhabitable within a century. The world's nations rally to begin a crash space programme to colonise the Moon and Mars to save as many people as possible. 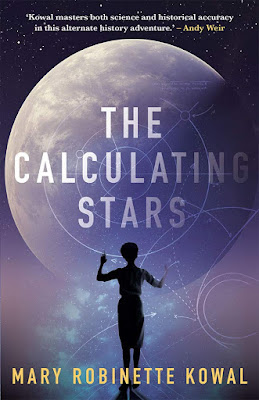 The Calculating Stars (which has just won the 2019 Hugo Award for Best Novel) is the first novel in the four-book Lady Astronaut series, which takes place in an alternative history where a meteorite strike in 1952 threatens the future of the human race. The title refers to the main protagonist, Elma York, a WWII transport pilot and mathematician who finds herself at the forefront of the mission to save the human race. This effort involves a multi-national effort via a trans-national space race involving thousands of people.

Numerous issues are raised and explored by The Calculating Stars, including an exploration of the Space Race starting earlier, using less sophisticated 1950s technology; a confrontation of sexism and racism in the setting; the damage caused by the meteorite and resulting climate change, complete with deniers refusing to believe anything bad will happen; and an exploration of the intersection of science, societal change and technology.

This multitude of plot points contributes to the book's length. At over 500 pages, it's a fair bit longer than most SF novels tend to be these days, but the sheer amount of material that needs to be explored means the pages fly by. The Calculating Stars is also written in an extremely easy-to-read manner, with prose that lacks artistry but also doesn't get in the way of the story. In this sense The Calculating Stars feels like an old-fashioned Hugo Award winner, like Spin or Rendezvous with Rama, eschewing stylised prose and in-depth characterisation to instead focus on the plot and the high concepts.

The book does adopt a more modern outlook by tackling 1950s issues of sexism and racism head-on. An interest social point from World War II is that women were able to take on a multitude of roles, from working in bomb factories to flying non-combat aircraft (apart from in Russia, where they were able to serve more freely on the front lines), but the second the war ended they were expected to go back to being housewives and mothers. The meteorite crisis means that once again women have to take a front line role as mathematicians, programmers for the very early computers and in other roles that a lot of men are unhappy with. Some have suggested this problem is overstated in the book, but if anything it probably undersells it (if anything, Elma's husband being a paragon of equality-supporting hunkness who supports her every decision feels a bit convenient, but given everything else going on it's an understandable approach), and not tackling the issue would be highly unrealistic.

Months and sometimes years flash by in chapters and the sheer scale of the effort to save the human race is impressively depicted. The novel does not shirk away from the darker side of human nature in the time period, but it also highlights its good points, such as the much greater acceptance of scientific discovery and exploration. Some may question the realism of us being able to get to the Moon more than a decade earlier than in real life, but Kowal's afterword provides some compelling arguments.

The Calculating Stars (****) is both a traditional, even classic-feeling SF novel and a modernist, revisionist take on a fascinating time period, celebrating the human spirit in full. As others have said, it is an enjoyable mix of The Right Stuff and Hidden Figures. It is available now in the UK and USA. It is followed by The Fated Sky and the forthcoming The Relentless Moon and The Derivative Base.
Posted by Adam Whitehead at 11:29

I haven't read the novels yet but I did read her story "The Lady Astronaut of Mars" which is the first story Kowal wrote in that universe. (I'm not sure whether Kowal even had further stories in mind at that time as it stands well on its own.)
If you haven't read this story yet, everybody do yourself a favor and make it the next thing you read. It's excellent (and won a Hugo award for best novelette). And it's freely available over at tor.com: https://www.tor.com/2013/09/11/the-lady-astronaut-of-mars/