Starz has cancelled American Gods, its fantasy TV show based on a novel by Neil Gaiman, after three seasons, citing declining ratings. 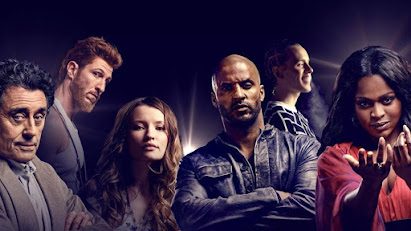 The TV show, based on Gaiman's bestselling 2001 novel, has had a raucous and uncertain behind-the-scenes production. Original writer-showrunner Bryan Fuller drove the first season an astonishing $30 million over budget before clashing with executives over the budget for the second season. He was fired and replaced with Jesse Alexander, with Gaiman himself stepping up for an increased, unofficial role in the second season. Alexander exited the show before Season 2 aired, being replaced by producing director Chris Byrne and line producer Lisa Kussner on an interim basis. Charles Eglee  replaced them for the third season.
The show also experienced a high cast turnover, with Gillian Anderson and Kristin Chenoweth departing after Season 1 and Pablo Shreiber and Orlando Jones departing after Season 2 (the former after being cast as the lead in the Halo TV series), although the core cast of Ricky Whittle, Ian McShane, Emily Browning, Crispin Glover, Bruce Langley and Yetide Badaki remained intact.
Although the show was applauded for its performances and rich visual style, it was heavily criticised for stretching a single 500-page novel out across at least four seasons, resulting in a somnambulantly glacial pace. Its critical acclaim significantly dropped after the first season and ratings tumbled, with only around a third of the Season 1 audience sticking around for a third season.
Production company Fremantle are now in talks for a TV movie to wrap up the story (Season 3 ended barely 40 pages from the end of the novel, allowing for a relatively speedy wrap-up), although Starz are reportedly lukewarm on the prospects.
Gaiman is currently producing an adaptation of his Sandman graphic novel series for Netflix.
Posted by Adam Whitehead at 14:34

I loved this show in season one, but I dropped it after they fired Bryan Fuller, and I didn't hear good things about season two. Is it worth picking it up again and watching the rest, or will I just be disappointed?