PIRATES OF THE CARIBBEAN director to helm George R.R. Martin's SANDKINGS for Netflix

Gore Verbinski (The Ring, the first three Pirates of the Caribbean movies and Rango) is lined up to direct a film for Netflix, based on George R.R. Martin's novelette Sandkings. 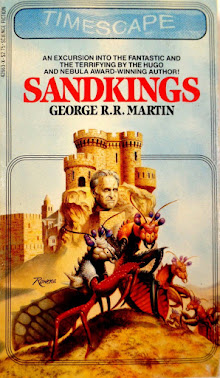 Originally published in 1979, Sandkings was Martin's best-known individual story prior to the publication of A Game of Thrones in 1996. Set in his science fiction "Thousand Worlds" setting, the story revolves around Simon Kress, a wealthy man on the planet Baldur who likes to collect exotic animals and finds a challenge in a new type of animal called a "sandking". Things go wrong when he starts mistreating the creatures for his own amusement. The story won the 1980 Hugo, Nebula and Locus Awards for Best Novelette and is Martin's only story to have won both the Hugo and Nebula award.
The story was previously adapted in 1995 as the first episode of the rebooted Outer Limits, starring Beau Bridges (who was nominated for an Emmy for his performance) and Lloyd Bridges. It was adapted by Martin's frequent collaborator Melinda Snodgrass and the action was relocated to contemporary Earth.
Verbinski is directing from a script written by Dennis Kelly (Utopia, Spooks, The Third Day). John Baldecchi (The Mexican) is producing.
Posted by Adam Whitehead at 20:10

Never quite understood how Verbinski didn’t end up better appreciated. His magic touch was clearly missing in the later Pirates films. Hopefully this helps turn that around.

Interesting news. The Outer Limits version of The Sandkings was my favourite story in the series. It quite terrified me.