Paramount puts yet another STAR TREK movie into development

Paramount Pictures has put another Star Trek film script into development, the fourth in as many years, as the studio attempts to resurrect the movie franchise after a successful television relaunch. 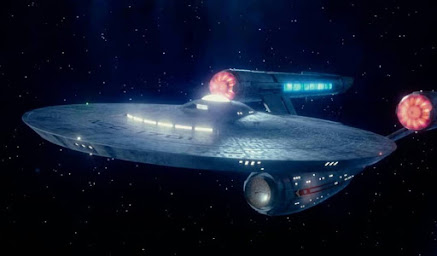 A question Paramount have been struggling with is whether to continue the "Kelvin Timeline" of the J.J. Abrams-produced trilogy of Star Trek (2009), Star Trek Into Darkness (2013) and Star Trek Beyond (2016), or to take a different tack. Paramount's recent re-merger with CBS also grants them access to the characters and designs from the relaunched Star Trek television universe, and indeed the original shows as well.

A fourth film in the Kelvin Timeline, featuring Chris Pine, Zachary Quinto etc reprising their roles, was developed for some time with S.J. Clarkson tapped to direct. The script reportedly involved time travel that would reunite Pine's younger Captain Kirk with his father, played by Chris Hemsworth. The project stalled due to budget problems and Pine and Hemsworth (who have both become much bigger stars in the meantime) being unwilling to accept a lower pay grade for appearing in the film. Reportedly some of these issues later eased, with Pine apparently willing to come back on board, but by that point momentum behind the project had died.

Meanwhile, Quentin Tarantino joined the party with a view to developing a more adult Star Trek film, later suggesting his idea was a feature-length take on the original series episode A Piece of the Action, in which the Enterprise crew visit a planet that has become a pastiche of human gangster films. Tarantino developed the idea for a year or two before deciding against directing in favour of producing. Paramount's interest in the project seemed to evaporate once Tarantino decided not to direct, although officially it remains on the backburner.

Noah Hawley (Fargo, Legion) then joined the bandwagon and apparently developed a new idea set in the Trek universe featuring an original cast of characters (after some initial confusion suggesting his script might involve Pine's crew). Hawley and Paramount agreed to develop the idea but it also seems to have lost momentum.

The new script is being developed by Kalinda Vazquez, a veteran of Star Trek: Discovery, Fear the Walking Dead, Runaways, Once Upon a Time and Prison Break. Vazquez was even named after an alien character who appeared in the original Star Trek episode By Any Other Name. Vazquez is currently developing a TV series based on Roger Zelazny's novel Roadmarks for HBO, with George R.R. Martin producing.

The new film's content is unknown, but apparently it is a brand new idea not related to any of the previous film scripts or ideas. It is unclear if the film would be set in the original "Prime Timeline" of the various TV series, or involve any of the characters from the shows Vazquez has worked on. However, it appears that J.J. Abrams' Bad Robot is producing, perhaps hinting at a return to Abrams' previous setting.

This is only a development deal and so far the film has not been formally greenlit. There is also no director attached at present.

The problems in getting a movie off the ground seem to stand in stark contrast with the success the franchise has had on television. Currently no less than five seasons of Star Trek are in simultaneous production, a record for the franchise: Season 1 of Prodigy, Season 2 of Lower Decks, Season 4 of Discovery, Season 2 of Picard and Season 1 of Strange New Worlds. Prodigy is due to launch this summer, whilst Season 2 of Lower Decks is due in late 2021. The other shows are expected to launch in 2022 (though there are some reports that Discovery's post-production is being accelerated to get it on air before the end of the year).