Of Honey and Wildfires by Sarah Chorn

The West is the home of shine, a substance which can power weapons and be used to do everything from preserving food to being used in medical treatment. The economy of the known world is starting to depend on shine. Ultra-rich businessman Matthew Esco has used mechanisms unknown to seal the shine fields away from rest of the world through the Boundary, through which he only controls access. He sends his son West to learn the ropes of business and prepare to take over from him, but Arlen is a very different sort of man. Meanwhile, a young girl named Cassandra grows up without her pa, a free spirit harbouring a personal grudge against the Esco family and determined to help liberate the Esco company's indentured workers. 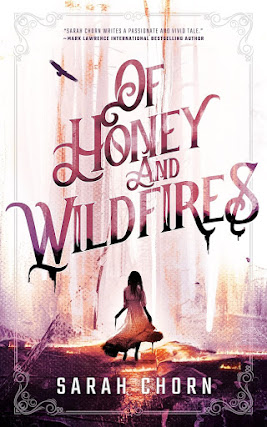 Of Honey and Wildfires is the second novel from Sarah Chorn and is rather different to her first novel, Seraphina's Lament. Lament was a dark, bloody and grim book of collapsing empires and people with unusual powers rallying to a greater cause (for both good and ill). Of Honey and Wildfires is likewise a novel with epic ramifications across a continent, but it's also a much more personal story of acceptance, loss and struggle.

There is a tighter focus this time around, with the story dominated by the POVs of Arlen Esco and Cassandra (Cassandra's friend Ianthe gets some page-time as well), whose stories are linked although they do not know it. Cassandra's father, Chris, is a rebel trying to bring down the system and has been absent from most of her life due to the struggle, something they both regret. Early in the book Chris kidnaps Arlen, who is then made aware of the atrocities and sacrifices his father's company enacts in the name of profit.

There are exotic shine-powered weapons and displays of what appears to be magical power, but Of Honey and Wildfires is a novel much less interested in the typical trappings of fantasy than it is in character. Each character is explored in impressive depth over the course of modest page count (the book barely cracks 300 pages), stripped back to their soul with their motivations laid bare. It's a gradual process in some cases, with the non-linear storytelling (which moves between events in the present and many years ago) helping with the deconstruction of the protagonists.

That's not to say that worldbuilding and plot are neglected. Chorn carefully builds up the world and the rules of how it works through the story and characters, creating a vivid setting. I was particularly impressed at how naturally the plot - which seemed to be developing quite slowly with the page limit counting down - came together in the last few pages when it looked like quite a lot would be left hanging. The plot construction of the novel is highly impressive given its focus on the characters. It's also good to see another novel joining the still small but growing "Fantasy Western" subgenre.

Of Honey and Wildfires (*****) is a book about trauma and about how childhood decisions and absences shape lives and destinies and identities. It's a short, emotionally raw novel showcasing formidable writing talent, and after the promising (if slightly less polished) debut of Seraphina's Lament, it's baffling why the author hasn't been picked up by a major publisher yet. The novel is available now in the UK and USA.

Email ThisBlogThis!Share to TwitterShare to FacebookShare to Pinterest
Labels: of honey and wildfires, sarah chorn