The Colour of Magic by Terry Pratchett

Ankh-Morpork is the greatest city on the Discworld - a flat planet carried through space on the back of four elephants standing astride a giant turtle - and has seen fire, flood, famine and even the odd barbarian invasion during its long history, but even it is unprepared for the arrival of a much more devastating threat: tourism. Twoflower is the first visitor to the city from the distant Agatean Empire, and is happy wandering around taking "pictures of the sights" with a magic box and soaking up the authentic atmosphere. This behaviour in Ankh-Morpork would normally result in him having the lifespan of a mayfly confronted by a supernova, but luckily the wizard Rincewind has kindly volunteered to be his guide and protector in return for not having his extremities removed by the city's Patrician, who is anxious to avoid insulting a foreign power with an army in the millions. 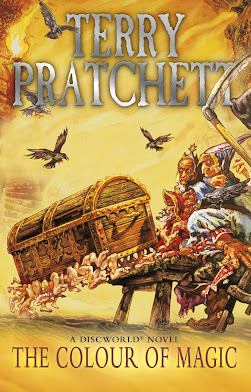 Unfortunately, Twoflower's attempts to introduce the concept of fire insurance to the hardy and creative business-owners of Ankh-Morpork results in an enforced flight from the burning metropolis and the beginning of a long and very strange journey across the Disc, taking in dragons, spaceships and the fabled temple of Bel-Shamharoth along the way. All the while the only spell that has ever managed to lodge itself in Rincewind's mind is very keen to get itself said, which could be a very bad idea indeed...

Email ThisBlogThis!Share to TwitterShare to FacebookShare to Pinterest
Labels: discworld, terry pratchett, the colour of magic

Quite a timely review. I stopped reading Sir Terry’s books some time ago. Not for any specific reason, but my reading habits changed. Lately, I’ve been downloading them when the Kindle edition comes up cheaply on Amazon. I have a yen to re read them all.