The Unseen University, the centre of magical learning on the Discworld, a building whose endless rooftops make Gormenghast look like a toolshed on a railway allotment and whose faculty are the guardians of magic for the whole world. Of course, wizards are renowned for being incredibly intelligent but not very smart, and when Drum Billet realises his time is almost up he decides to pass on his staff to the eighth son of a poor blacksmith, himself an eighth son, and thus a potential great wizard. Unfortunately, he neglects to check the baby's gender first... 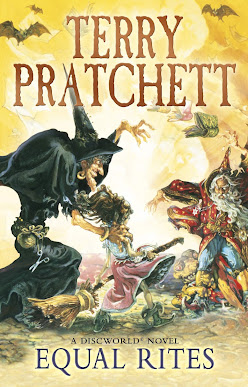 After two unexpectedly bestselling novels, Terry Pratchett changed gears in his writing career. He quit his day job as a press officer for a nuclear power station and became a full-time writer, churning out two volumes a year for more than a decade. He also adjusted his vision of what the Discworld series could be. No more a series of satires of fantasy or fairy tale tropes, he decided that he could take any subject and make a Discworld novel about it.

Equal Rites is the first novel to employ this approach. No previous characters from the first two books turn up (with one orange-furred and banana-stained exception), and there isn't even any mention of those events. Instead we have new characters having new adventures. Pratchett also starts to use his creation to address real-world concerns here, in this case, well, equal rights for those of a nonmale persuasion. The humour remains fairly broad, but you can almost sense the author thinking at this point that maybe the funny planet with the turtle and elephants can be used for something more interesting than just poking fun at Lovecraft and Conan the Barbarian, amusing as that may be. Unfortunately, this idea falters a bit since Esk's story is meant to make Unseen University a co-ed establishment, bringing in female wizards and making it more equal. As later books show, none of this happens, Esk doesn't show up again until more than thirty books down the line and UU remains a male-only establishment in the later novels. Given how well Pratchett develops his world, this lack of evolution is mildly disappointing.

That's more a problem with the later books than this one, though. As with several other early Discworld books, there is something of a lack of focus here. The book starts off as a travelogue, with Granny Weatherwax and Esk travelling to Ankh-Morpork from the tiny Ramtops village of Bad Ass (later retconned into the Kingdom of Lancre, the setting for many later books), though the limited page count (Equal Rites barely cracks 200 pages in paperback) and the need for a Big Finale in Ankh-Morpork curtails this element just as it's getting interesting and we quickly (via a jump-started, second-hand broomstick) move to the city and the ending which - and stop me if you've (already) heard this one before - involves the threat of Unspeakable Things from the Dungeon Dimensions erupting through the skein of reality to destroy the universe. Again.

In terms of character, it's hard to argue with the book: Esk is a well-defined protagonist and Granny Weatherwax, of course, is one of Pratchett's signature characters, a formidable and solid figure whose common sense sometimes feels a bit adrift in a world as off-kilter as this one (Pratchett uses the Only Sane Person idea a lot in the series, but none are saner than Granny Weatherwax). This is still very much a proto-Granny, not the much more complex and sophisticated character of the later novels, but it's fun to revisit the somewhat simpler village witch and see her evolution and growth into a stronger and more interesting figure. Among Discworld characters, only arguably Sam Vimes of the City Watch can match this kind of evolution. We also get our first sympathetic Archchancellor of Unseen University, Cutangle, and it's rather a shame he doesn't show up again (though given the events of Sourcery, that might be for the best, for him at any rate).

Equal Rites (***½) is important as the first Discworld novel where Pratchett changes gears and realises he can tell self-contained stories about this world not involving Rincewind and Twoflower, and use the Discworld as a reflection for real-world concerns as well as simply being funny. It's still Early Pratchett, with a bit of a reliance on standby ideas, but you can see the growing ambition and craft on display here. The novel is available in the UK and USA.

I previously reviewed the book here.