Wizards of the Coast, the creators and publishers of the Dungeons & Dragons tabletop roleplaying game, have finally confirmed that the in-production D&D movie will take place in the Forgotten Realms world, ending years of speculation. 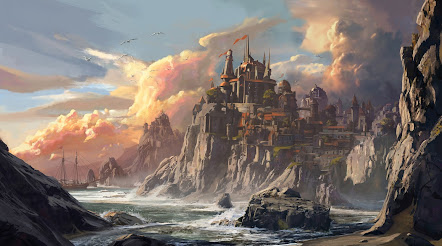 The city of Neverwinter on the Sword Coast North, a rumoured location for the film. Art: Jedd Chevrier

A much earlier, long-superseded draft of the script was set in the Realms, specifically in the city of Waterdeep and the dungeon of Undermountain beneath it, but since then the film has passed through multiple writers, rewrites and directors, leading to some confusion over the film's setting. Yesterday a film synopsis leaked placing the action in the Realms, in and around the city of Neverwinter, but according to Screenrant this is an old synopsis which is no longer completely accurate.

WotC have now confirmed that the setting is indeed the Realms, but nothing specific beyond this. This will mark the first appearance of the Forgotten Realms - history's most popular and successful epic fantasy shared world setting - in a live-action adaptation. More than 290 novels have been published in the Forgotten Realms setting, with cumulative sales approaching 100 million, well over 30 million alone sold by R.A. Salvatore in his popular Legend of Drizzt series. Authors such as Paul Kemp, Ed Greenwood, Troy Denning, Elaine Cunningham and Erin Evans have sold many millions more novels in the setting.

Around fifty video and mobile games in the setting have also been released, including the highly popular Baldur's Gate, Dark Alliance, Icewind Dale and Eye of the Beholder series. Dungeons & Dragons: Dark Alliance, starring Drizzt Do'Urden and the Companions of the Hall, will be released next month, whilst the long, long-awaited Baldur's Gate III is aiming for release next year.

The Forgotten Realms world was created by Canadian author Ed Greenwood in 1968 as a setting for stories he was writing at school. He expanded the setting as a Dungeons & Dragons campaign world in 1976 and began writing D&D articles for Dragon Magazine in 1978, frequently mentioning characters and locations from his home setting. TSR, Inc., the publishers of D&D, bought the setting from Greenwood and brought it into print in 1987. It has never been out of print since, enjoying the distinction of being the only D&D campaign setting supported for every edition of the game and the setting most frequently used in D&D-branded adventures, novels and video games. With the release of D&D's 5th Edition in 2014, the world became the "default" setting for D&D, although recently Wizards (who bought TSR in 1997) have backed off a bit on that in favour of supporting gaming groups in creating their own worlds, or using other settings.

Alongside this news, Wizards of the Coast confirmed that 2020 was the most successful year in D&D's history with over 30% sales growth on the previous year. They confirmed plans in the coming months to bring back two "classic" and long-out-of-print campaign settings (one heavily rumoured to be Dragonlance, to accompany the release of the first new Dragonlance novels in over a decade by setting writers Margaret Weis and Tracy Hickman), as well as releasing a Forgotten Realms card set for the Magic: The Gathering collectible card game.

The D&D movie is currently shooting in the Titanic Studios in Belfast, Northern Ireland, and stars Chris Pine, Hugh Grant, Michelle Rodriguez, Justice Smith and Regé-Jean Page. The film is currently scheduled for release on 3 March, 2023.