Fingers Crossed: How Music Saved Me From Success by Miki Berenyi

Founded in 1987, the British band Lush were (and remain) an interesting study in contradictions. They formed as a self-described shambolic amateur unit with a terrible live performance but quickly improved and gained the ambition to make complex songs with unusual time signatures and atmospherics, becoming part of the movement which the Americans dubbed "dreampop" but the British called "shoegaze." 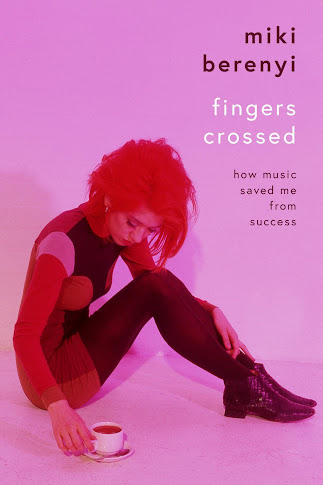 Lush also had a rockier side which put them in a good position when they were unexpectedly recruited by Perry Farrell to open the second-ever Lollapalooza tour in 1992, giving them a small but intense following in the United States, not to mention a hair-raising series of anecdotes about playing alongside Ministry, Pearl Jam and the Red Hot Chilli Peppers.

Lush's relentless touring schedule and ability to switch between long, atmospheric songs and punkier, hook-laden guitar numbers should have stood them in good stead for the Britpop explosion, and they achieved the height of their commercial success at that time (with two Top 10 albums and four Top 40 singles), but they also found themselves creatively burned out and annoyed by label pressure to compromise to fit in with the music of the time. When drummer Chris Acland tragically committed suicide at the end of 1996, the band dissolved, returning only for a short-lived reunion in 2015-16 which ended acrimoniously.

Miki Berenyi was Lush's lead singer and frontwoman, sharing guitarist and songwriting duties with former schoolfriend (and music fanzine co-editor) Emma Anderson. Lush were somewhat unusual in the late 1980s and early 1990s as a British guitar band whose lead creative forces were women, leading to some positive attention but also highly negative and, at times, irrational criticism, including bizarre claims their songs were written by their label. They also had to suffer attempts to make them appear in revealing clothes for magazine articles and videos, and their male colleagues (Acland and bassists Steve Rippon and, later, Phil King) were largely ignored unless the band put their foot down to be depicted equally. The fact they were also moderately successful in the United States when many of their contemporary British colleagues struck up much higher profiles in the UK but couldn't crack America at all seemed even more galling to certain people, and, as gruelling as the American tours could be, they were a relief from the sometimes indifferent British ones. Berenyi, especially, found herself the frequent star of music periodical gossip columns, thanks to frequently attending gigs in London and not holding back her opinions on anything (her eye-catching red hair also made her easy to spot in such venues).

Fingers Crossed is Berenyi's autobiography and a startling look into one of the most interesting, musically creative periods in British history. It takes until almost halfway through the book before we even get to that point. The first half of the book is taken up by Berenyi's family history and childhood. This could be indulgent - rock bios are generally aimed at people who want to learn more about the inside story of who hated who in the band, not necessarily where they went to infant school - but Berenyi is astute enough to realise that much of her personality, personal history, songwriting acumen and the need for a found family of friends and bandmates is informed by her rather unusual upbringing. Also, it's fascinating stuff. The daughter of a Hungarian sports reporter and a Japanese actress (Yasuko Nagazumi, who had regular roles in The Protectors and Space: 1999) who split just a few years after her birth, Berenyi grew up in two very different worlds. Her mother's world was one of glamour, famous actors and parties. Her mother moved to Los Angeles, giving Berenyi an early experience of transatlantic travel and adventures in the Hollywood Hills and visits to the family home in Japan. Berenyi's father's world was somewhat more austere, with frequent trips to Hungary to clandestinely sell western goods beyond the Iron Curtain and being partially raised by her Nazi-sympathising grandmother, who abused her both emotionally and physically.

These aren't all pleasant stories, but there is also a lot of love and nostalgia around, and an evocation of life in 1970s Britain which could both be rough (Berenyi suffered a lot of bullying and attempted bullying at various schools) but also a lot of fun, especially given the privilege of her mother's wealth and introductions to various celebrities. Once the story moves into the 1980s and teenage Berenyi and new-found friend Anderson become music fans, things really kick off: a chance encounter with one of the Thompson Twins sees them being introduced to the world of record production and then starting their own music fanzine, Alphabet Soup. A combination of student grants, studying in London and a ridiculously low cost of living (unachievable now in London) gives them weekly access to gigs, and their contacts lead to a job in the industry for Anderson. Eventually and perhaps inevitably they form a band. Unfortunately, their industry and media contacts give them too much hype before they are ready for it, leading to a flurry of "the next big thing!" articles years before they were even ready to record their first full album, leading to a resulting inevitable backlash from the UK's notoriously tabloidy music press.

The book is searingly honest, perhaps overly so, with Berenyi's keenness to admit to her own faults being refreshing (a few bad episodes and dubious relationship choices appear to be Berenyi's own fault, so it's a relief which she readily admits as much) but also going a bit overboard. Berenyi constantly downplays her own musical skills throughout the book, when even a brief perusal of Lush's back catalogue immediately contradicts that idea.

The relationship between Berenyi and Anderson is the most interesting in the book, as the two women have somewhat different personalities which sometimes clash but also a unified interest in making the best and most interesting music possible, sometimes joining forces to overrule producers, managers and promo people who believe otherwise. There are frustrations apparent in the relationship, mainly stemming from communication issues - at one point Anderson decides to quit the band because she has taken up a position she assumes is completely at odds with everyone else and is shocked to find Berenyi already in 100% agreement with her - and their different views on the musical process. Anderson is happiest in the studio with a compliant producer, finding the best ways of assembling the songs, and finds the tours (especially of the USA) draining, whilst Berenyi much prefers getting out and playing live to crowds. The tension between the two perspectives leads to some great music, but also stressful situations within the band.

The book also features an interesting fresh perspective on being a woman on the guitar band circuit at this particular point in time. Berenyi wryly notes that she thoroughly enjoyed the life of rock and roll, drinking too much and engaging in casual hook-ups, which male artists at the time were congratulated for but women were criticised about (often by the exact same commentators). Berenyi saves much of her ire for the Britpop era, which saw an explosion of pent-up misogyny and attempts to exploit young women under the guise of empowerment, and women in the business were taken advantage of. The seedier side of Britpop proves an unedifying experience (although it's good to see various groups, like Pulp, come out of it very well), despite the avalanche of good music that comes alongside it.

One possible criticism is that the story feels incomplete. It effectively ends after Lush formally dissolves in early 1998 and we only get few a few paragraphs describing Berenyi's subsequent life: her move into being a sub-editor in the publishing industry, an ill-fated Lush reunion in 2015-16, the births of her two children and her more recent forming of the excellent band Piroshka (who have produced two very good albums to date). If the book forms the story of Miki Berenyi's life, there's a very large, 25-year chunk of it missing.

Overall the book is fascinating, eruditely-written, constantly amusing and jam-packed with interesting trivia: Emma Anderson dated My Bloody Valentine's Kevin Shields before Lush formed; Lush and Ministry formed a strong-if-unlikely alliance during the Lollapalooza tour and got up to mutually-supported mayhem; Berenyi once got back from tour to find an uncommunicative Richard Ashcroft pouring over music demos for A Northern Soul with her then-boyfriend; Blur and Pulp were both Lush support bands before becoming Britpop giga-stars.

It's also an at-times bruising, personal story of abuse and neglect, with periods of over-drinking and dubious relationship decisions (drug addiction, fortunately, seems to have been avoided), honestly owned up to. There's also an interesting thread, which perhaps could have been expanded on further, where Berenyi identifies episodes and events that bleed directly into her songs. The obvious example is from Lush's best-known hit, "Ladykillers," which was directly based on lengthy "hey, I'm actually a nice guy who respects women," conversations with male musicians whose actions didn't quite live up to their words. The creative process of how the songs were made is occasionally hinted at, but maybe could have been elaborated on.

Then again, this isn't necessarily your standard rock bio. There's no lengthy appendix featuring every gig the band played or a list of their equipment. It's a from-the-heart-by-way-of-the-soul story of life, music, love and loss, and is compelling reading.

Fingers Crossed: How Music Saved Me From Success (****½) is available now in the UK and USA.

Thank you for reading The Wertzone. To help me provide better content, please consider contributing to my Patreon page and other funding methods.
Posted by Adam Whitehead at 14:59