After numerous delays, Ian Cameron Esslemont's new Malazan novel finally has a release date. Forge of the High Mage (previously called The Jhistal) is the fourth novel in his successful Path to Ascendancy prequel series, telling the story of the forging of the Malazan Empire. It will be published on 6 April 2023. 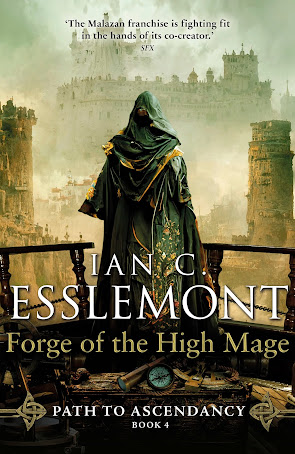 However, it's the novel's cover that has generated some harsh criticism. The artwork is a bit weird and off-centre, and more than a few observers have said it is clearly AI-generated (with the hastily-Photoshopped compass and telescope being particularly notable). AI-generated artwork has boomed over the summer with the launch of several apps which see computers generated images based on just a few keywords, with results ranging from excellent to poor. The rise of AI artwork has been cited as a threat to the livelihood of actual human artists, many of whom were already struggling from decreasing pay as publishers attempt to reduce overheads.

The publishers have not yet commented on the origin of the artwork and it will be interesting to see if it turns out this was an original painting after all (it does have some hallmarks of regular Malazan cover artist Steve Stone).

Email ThisBlogThis!Share to TwitterShare to FacebookShare to Pinterest
Labels: forge of the high mage, ian cameron esslemont, path to ascendancy, the jhistal, the malazan book of the fallen

It could be a temporary cover, after all, there are no ships... 😂

You should really give the enyire Malazan Book of the Fallen more attention, Eriksen's writing can get a bit much and are really dark but the overall story is worth it. Esslemont's Novel of the Malazan Empire series are much easier to read and give a different look at the world either way its a great series, enjoy