George R.R. Martin offers further update on THE WINDS OF WINTER, estimates the book is over 75% complete

George R.R. Martin has offered another update on his progress on The Winds of Winter, the sixth and penultimate volume in his A Song of Ice and Fire series (better known these days as "the Game of Thrones books,"), only four months after the last one. 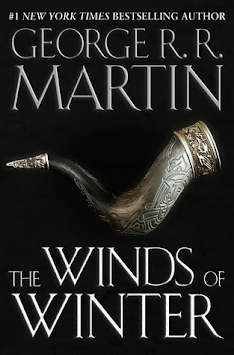 Martin reiterates that the book is going to be significantly longer than the previous two longest novels in the series, A Storm of Swords and A Dance with Dragons. In his previous update, he indicated the book will around 300 manuscript pages longer than either of those volumes, and maybe longer. He also reiterates that at such a size, it may be necessary for the novel to be split into two volumes. However, he wants to finish the book in full before it is split, so the two volumes can be released together or just a few months apart (unlike the split of A Feast for Crows and A Dance with Dragons, which led to a six-year gap between the two volumes).
Martin also suggests that the book is 75% complete, immediately before saying his estimates are notoriously unreliable. So the book may be significantly more than three-quarters done, although hopefully not less. If we assume that tracks linearly, that means the book might still be two to three years away.
Posted by Adam Whitehead at 19:06

Email ThisBlogThis!Share to TwitterShare to FacebookShare to Pinterest
Labels: a song of ice and fire, george r.r. martin, the winds of winter

It's ok, George. I've used that excuse before too.

If we have some fun with math here we can start with the base fact that Dance was released in July 2011 and this interview was done in October 2022 which gives us a total of 135 months of writing time so far. Given that this is 3/4's of the work so far then we need 1/4 more which is 135/3 = 45 months more writing time. Adam has previously stated it would take 3 months or so to publish a manuscript so that brings us up to 45 months writing time + 3 months publishing time for 48 months or 4 years until we see this book in October of 2026. GRRM will be 78 at that time.