House of the Dragon: Season 1

The Old King, Jaehaerys Targaryen, dies with no clear line of succession. At a Great Council, the realm chooses Prince Viserys as his successor, despite the superior blood-claim of Princess Rhaenys, establishing a precedent that a man's claim to the Iron Throne will always outclass that of a woman. Many years later, Viserys' wife dies in childbirth and he names his daughter and only child, Rhaenyra as his own heir. But when Viserys marries again and sires several sons, the precedent that he benefited from sets Westeros on a course for a deadly clash. 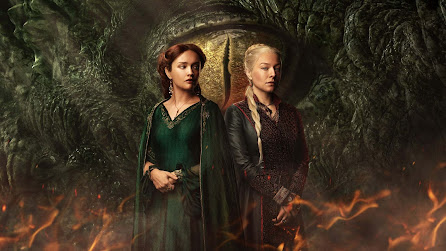 HBO's Game of Thrones, based on George R.R. Martin's A Song of Ice and Fire epic fantasy series, was the most successful, most talked-about television show of the 2010s. The disappointing finale aside, the show reset expectations for the scale of stories that could be told on the small screen and single-handedly turned adult, live-action fantasy into a viable television genre. Many fantasy shows have come along since seeking to pick up where it left off, such as The Witcher, The Wheel of Time and, most recently, Amazon's Rings of Power. But HBO itself has now rejoined the fray with a direct spin-off, a prequel set almost 200 years before the events of Game of Thrones and charting the division of the Targaryen dynasty.

Perhaps frustratingly for all those other claimants to the fantasy crown, House of the Dragon emerges as the clear successor to Game of Thrones in overall quality. Despite the near-total absence of any of the same creative team from Game of Thrones, House of the Dragon arrives on screen with formidable verve and gravitas. It has the confidence to deal out its storytelling in measured doses, long scenes devoted to characterisation and relationships punctuated by swift bursts of action, dragonfire and violence. The show channels some of the same energy HBO's other great political drama, Succession, as a story of familial drama with vast-ranging consequences, a huge scope examined through a small lens. This gives Dragon some benefits even over its mothership series, with much less rapid transitioning between events separated by thousands of miles, allowing the show to delve deeper into the characters and their motivations.

Dragon still doesn't make things too easy for itself. The first season spans almost three decades, with several shifts in the cast. There's a lot of similar-looking characters with similar-sounding names, many coming complete with their own dragon (some of whom change owners as the story continues). If Game of Thrones had a sin of sometimes shying away from complexity and streamlining A Song of Ice and Fire's scope into something less ambitious, combining characters and (often pointlessly) renaming those with even vaguely similar names, House of the Dragon goes in the other direction, trusting the viewers will follow it along. This stands in especially harsh contrast to The Rings of Power, where at almost every turn the writers instead chose to simplify and streamline things, constantly underestimating the both the intelligence of the viewer and the richness of Tolkien's source material.

Where Dragon overcomes potential hurdles is its constant reframing of the story on the relationship between Rhaenyra Targaryen and Alicent Hightower. Childhood friends and contemporaries (in a shift from the source material, where Alicent is older and more ambitious from the off), the two enjoy a strong camaraderie that is upset by politics, especially the yearning ambition of Alicent's father, Otto, Hand of the King. From the perspective of each, both Rhaenyra and Alicent have excellent reasons and sympathetic motivations for much of their actions. Rhaenyra is foolish in having children with something other than her husband, but she is also put in a difficult position by his inability to have children with her. Viserys often makes weak decisions to appease those around him, but he both has an aversion to bloodshed (not necessarily a bad thing) and a deep-seated belief that House Targaryen must marshal its strength against other, greater threats. Even the central argument over whether a woman should sit the Iron Throne delves into the idea of idealism versus pragmatism, what should be conflicting with what actually is.

The casting is exemplary. Paddy Considine plays King Viserys as a peacemaker and a family man who is never happier when sharing good news with his closest friends and family. Realpolitik and discussions of war anger him. Considine is already one of Britain's finest actors and House of the Dragon has finally given him the international awareness of that; his final scenes in the season should ensure him an Emmy nomination, at the very least, next year.

Similarly, Matt Smith shakes off the last vestiges of being Doctor Who to give a performance mixing anger, edgy violence and a yearning for acceptance as Prince Daemon, Viserys' younger, more reckless brother whom everyone fears will plunge the realm into war, but grows over the season into something of a more responsible figure. Smith had already made a great career pulling away from his early signature role and House of the Dragon solidifies his reputation.

Other seasoned hands get some great moments in the sun: Rhys Ifans is excellent as Otto Hightower, giving a human edge to his character's grasping ambition. Steve Toussaint brings a mixture of pride, dignity and passion as Lord Corlys Velaryon, the Sea Snake. Eve Best is outrageously good as Rhaenys, the Queen Who Never Was, whose historical anger at her own usurping brings an interesting perspective to the current crisis.

The focus of the season is definitely on the two central characters of Rhaenyra and Alicent. Milly Alcock and Emily Carey play the young Rhaenyra and Alicent (in the first five episodes) with a mixture of energy and responsibility. Emma D'Arcy and Olivia Cooke play their adult incarnations (in the latter five episodes) with more nuance and cynicism, but channelling their younger counterparts' mannerisms and expressions in an impressive way.

Production-wise the show is also outstanding. Impressive sets and excellent costumes abound, and the CG is superb, especially anything involving the dragons. The show does make liberal use of video walls (similar to those used on The Mandalorian) and, like a lot of other modern fantasy shows, it sometimes feels a bit unnecessarily fake when real locations are substituted for CGI backdrops that can't help but feel sterile and unconvincing. Dragon goes a step further by faking some of the exact same places that were shot on location in Thrones (most notably the Dragonstone causeway), which makes the fakery even more obvious. However, Dragon does, for the most part, avoid the awful, plastic-looking CGI that blights a lot of modern genre productions, usually with much better use of lighting. Unfortunately Dragon does have a lot of murky night-time scenes and these are almost as badly-lit as the final season of Game of Thrones, with important scenes vanishing in a murky grey soup.

House of the Dragon is not flawless and does make some odd choices, and some outright (but certainly not fatal) stumbles. Several times the show unleashes "rule of cool" nonsense, things that look really spectacular but don't make any sense if you spend five seconds thinking about them: a Kingsguard brutally murdering a guy in front of a room full of witnesses and suffers no consequences; a dragon smashes through a building and kills dozens of civilians and nobody gives a toss; a character throws away a moment where they could end a conflict before it even starts with a minimum of bloodshed (although they later give some semi-reasonable justifications for it); Daemon runs through a storm of arrows and single-handedly fights off dozens of men in a highly improbable manner. In these moments the show teeters on the edge of Game of Thrones Season 7 and 8 silliness, but it always manages to pull itself back from the abyss with its character-focused and character-based dramatic scenes, which is where the meat of the story is.

Season 1 of House of the Dragon (****) is the finest slice of the Thrones franchise since at least the fourth season of the original series, and certainly the finest slice of live-action, epic fantasy TV to air since then as well (despite some other showings bringing much more money to the table). It's character-focused story mixes family and political drama to great effect, with outstanding vfx set pieces and uniformly excellent performances. Occasional jarring jumps in the timeline and events that visually impress but don't make sense logically threaten to undo the good work being done elsewhere, but ultimately the season is a great piece of television fantasy and drama.

The season is available to watch on HBO and HBO Max (and local equivalents) in much of the world, and Sky Atlantic and Now TV in the UK.

Thank you for reading The Wertzone. To help me provide better content, please consider contributing to my Patreon page and other funding methods.
Posted by Adam Whitehead at 13:17

Maybe you should mention in the review that "House of the Dragon" is based on "Fire & Blood" novel by George R.R. Martin.

It was deathly boring and I gave up after 3 episodes. My wife finished watching it last night and I asked her during the finale if anything had happened yet 'not yet was the reply'.

If Rings of power didn't come out this year, it would have been the most overhyped show in history.

Always a pleasure to read your reviews, Wert, but I think you've been far too charitable this time around. I am by no means a purist, or some Martin uberfan. Hey, I liked RoP Season 1! :) But this is an abominable season of television. Plot, characters, even much of special effects and the general cinematography... it's dreadful. This in my humble view is among the worst fantasy shows in recent memory. If HBO hadn't spent a billion dollars on this, and if it weren't for the IP (lo and behold! it's Game of Thrones!), this show would be cancelled right now.

Indeed. Surprised there was no mention of this or a delve into a compare/constrast, and consideration for the future...