A few weeks ago CD Projekt unveiled a list of future projects they are working on, including multiple new Witcher games and a sequel to Cyberpunk 2077. They have today confirmed that one of those games, the mysterious "Canis Majoris," is a full-fledged remake of The Witcher, the 2007 RPG that kicked off the franchise and began CDPR's rise to fame. 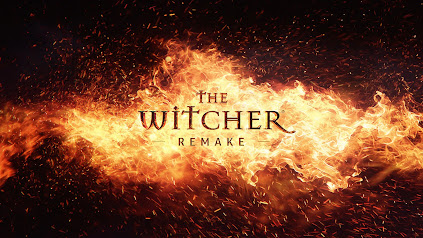 The Witcher told the story of Geralt, the titular monster-slayer, as he dealt with amnesia and re-learned his fighting skills. Shortly into the game his home castle of Kaer Morhen is raided by the Salamandra, a criminal organisation. Geralt pursues the organisation back to the kingdom of Temeria, which is being afflicted by a plague. Through his typical mix of following clues, investigating crimes and pursuing a startling number of side-quests and optional romances, Geralt eventually uncovers the secrets of the organisation and brings them down.
The game was praised on release for its writing, its focus on character-building (notably several non-combat quests doing mundane things like setting up a pleasant dinner for your friends) and its excellent atmosphere, not to mention how it used BioWare's Aurora Engine (previously used for Neverwinter Nights) but pushed it to the limit in terms of graphics and detail. However, the game was criticised for its decidedly ropey combat and its plethora of bugs, including saved games that would take several minutes to load. CDPR released The Witcher Enhanced Edition a year later with most of these issues solved, which is when the game picked up a far bigger audience. The Witcher 2: Assassins of Kings followed in 2011 and The Witcher 3: Wild Hunt in 2015.
The original Witcher is understandably a dated and somewhat janky game to play, not to mention never being released on consoles, so a full-blown remake certainly seems like the way to go. The remake will use Unreal Engine 5 and CDPR are using it to field-test features and ideas they want to include in their next three Witcher games, which will also be using the new engine.
Day-to-day development of the game is being carried out by Fool's Theory, a studio that previously worked on Outrider and Baldur's Gate III. Several veterans of the Witcher series are working at the studio and CDPR are providing "full creative supervision." The game is very early in development, so don't expect to see this for at least a few years.
CDPR themselves are early at work on what is informally being called The Witcher 4, although it is believed the game will not be called that and will involve a new protagonist. Their next release will be Phantom Liberty, an expansion for Cyberpunk 2077.
Posted by Adam Whitehead at 20:28

Email ThisBlogThis!Share to TwitterShare to FacebookShare to Pinterest
Labels: cd projekt, the witcher, the witcher remake