Into the Narrowdark by Tad Williams

The High Kingdom is in peril. The Norns have returned and are advancing from the north, threatening both the Hayholt and the Sithi strongholds of the old forest. The tribes of the Thrithings are threatening an invasion from the east. There is civil war in Nabban. The realm needs King Simon to act decisively to crush these threats, but he is bereft and grief-ridden. As the king's allies try to rally to save the kingdom, his enemies move against him. 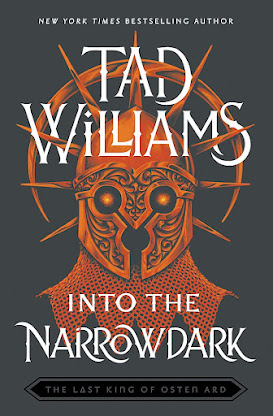 The Last King of Osten Ard is a sequel series to Tad William's Memory, Sorrow and Thorn trilogy, an acknowledged classic of epic fantasy. Picking up the action thirty years later, this sequel series asks hard questions about what happens to the heroes who saved the day in one story and if they are the best people to lead the land through all the complexities of life in peacetime.
The first two volumes of the series, The Witchwood Crown and Empire of Grass, set up a fascinating, multi-sided conflict as the human kingdoms struggle with internal divisions whilst their old Norn enemies have managed to rebuild and are now threatening a fresh offensive. But, unlike the original trilogy, Williams also spends a lot of time in the Norn camp, exploring their internal divisions and politics as well, humanising this previously faceless enemy. The result is a richer, more interesting series which is less interested in being a retread of the hero's journey (though a few characters also get arcs more akin to that).
Into the Narrowdark is both the third book in the series and the opening half of the concluding chapter; yet again (to the point it's virtually become a meme) Williams delivered a book far too vast to fit between two covers and the book was split in half for publication. Unfortunately, this is to this volume's detriment. In normal circumstances, Williams is the very embodiment of the "slow-burn" writer, setting up his guns very carefully in a row before firing them, but when he fires them the story comes together impressively well, even within individual novels of a series. This novel is, unfortunately, all setup and no resolution, which is fairly frustrating given, at almost 600 pages in hardcover, it's not exactly a short book.
The other problem is that Williams is not at all shy to revisit previous story ideas. So, for those who were kind of over the characters spending hundreds of pages lost in the Aldheorte forest in earlier books, the prospect of spending yet more time with characters wandering through the exact same woods may not entice. The same for characters lost in the Nabbanese wilderness, or roaming back and forth through the Thrithings or even just roaming lost through the labyrinth cellars of the Hayholt. If we were getting major character growth or huge backstory revelations in these sequences, that would be one thing, but we're not, or very little. After the first two books did a good job of matching plot development, worldbuilding, political intrigue and character growth, this third volume feels more like an exercise in wheel-spinning.
That said, Tad Williams is still an excellent prose writer and a gifted evoker of atmosphere. The few battle sequences are vivid and well-described, and Morgan, at least, gets some much-needed growth. Returning to the world of Osten Ard is like revisiting an old favourite haunt, and there is much to enjoy in the scenery even if it doesn't feel like it's moving past very quickly.
The book does end on a rousing, startling cliffhanger and at least the second half of the novel is complete (although being revised), but Into the Narrowdark ends up feeling exactly what it is: half a book, in urgent need of its conclusion.
Into the Narrowdark (***) is half of a potentially very interesting book, but until the second half is published, it's hard to fully appreciate if this novel's slow, slow-burning pace is justified. The novel is available now in the UK and USA and the final volume in the series, The Navigator's Children, should hopefully follow in 2023.
Thank you for reading The Wertzone. To help me provide better content, please consider contributing to my Patreon page and other funding methods.
Posted by Adam Whitehead at 12:19

Email ThisBlogThis!Share to TwitterShare to FacebookShare to Pinterest
Labels: into the narrowdark, memory sorrow and thorn, tad williams, the last king of osten ard

I haven't read the book yet, but I've got to say that I'm a little bummed out that it isn't getting a gorgeous Michael Whelan cover like the rest of the Osten Ard books. I'm sure its because the first two books haven't exactly sold gangbusters. The publisher is probably hoping simpler cover art can attract attention or maybe they just don't think the series is worth the expense of hiring such a prominent artist. Whatever the reason, my Tad Williams shelf is going to be just a little less beautiful once I've added this one to the bunch. Too bad.