REM's Automatic for the People turns 30

As I noted last year, when we reached the 30th anniversary of REM's Out of Time, the relentless onward march of linear time continues to remind us of its inevitability with Automatic for the People now hitting the same milestone. 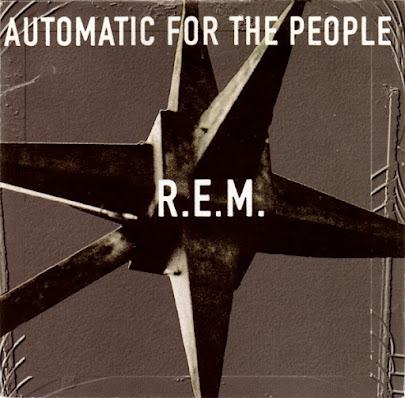 This time around, the lengthy thinkpieces and flashbacks to the album's release are considerably less surprising: Automatic for the People is REM's most commercially successful album, their best-known record, contains most of their famous singles that aren't "Losing My Religion," and probably their most critically acclaimed, although with a back catalogue as storied as theirs, that's debatable.

As noted previously, REM spent the 1980s gradually elevating themselves from a cult local band from Athens, Georgia into a relatively well-known alt-rock unit. Through six albums they grew their craft and their success fairly modestly. They then went ballistic with Out of Time, released in early 1991 and propelled by the mega-hit "Losing My Religion," which they followed up on (not entirely without later regret) with the cheesy children's anthem "Shiny Happy People." Out of Time also generated a further two hit singles ("Near Wild Heaven" and "Radio Song").

The album's sales were stratospheric, but the band had already decided not to tour it, having spent almost the entirety of the 1980s either touring or in the studio. With the record in the bag, the band could have taken a break. Drummer Bill Berry in particular had been developing early ideas for the next album and said he wanted the next album to "rock out," and there seemed to be a general agreement that the next album would be heavier, or at least more like their earlier, rockier material.

Despite completing Out of the Time, the band continued on their creative streak, bringing instruments to the mixing sessions and filling in time between songs by jamming or playing one another ideas. Early demos for "Drive," "Try Not to Breathe" and "Nightswimming" were recorded. Work on the album started in earnest only three months after Out of Time went on sale, with Berry, guitarist Peter Buck and bassist Mike Mills swapping instruments and playing without drums to try to stimulate fresh ideas. Eventually they recorded around thirty songs, including several faster-paced ones they thought might form the core of the album. Instead, they agreed they didn't really fit in with the rest of the material and Berry agreed to suspend his objections since some of the other tracks seemed to have much more potential.

To avoid the writing problems on Out of Time, where vocalist Michael Stipe hit the wall of writer's block and gave two tracks to Mills to write lyrics for and even just winged another song on the spot ("Country Feedback"), the band completed the demos to a high standard and gave them to Stipe to create lyrics for without the harsh deadline of having to be in the studio so soon afterwards. Stipe had several months to craft lyrics for most of the tracks. The final recording of the album took place from March to July 1992 in fairly relaxed circumstances. The band were excited when Led Zeppelin bassist John Paul Jones joined the sessions to create string arrangements, as opposed to the previous record where the strings were arranged more ad-hoc in the studio.

Warner Brothers were apparently surprised when the band presented them with the record, feeling it was somewhat downbeat and not as poppy as Out of Time. However, aware that they'd completely misjudged the commercial potential of "Losing My Religion," they went with the band's judgement again, even the odd choice of "Drive" as the lead single. They were rewarded with excellent reviews and soaring sales. REM's strategy of releasing increasingly great singles from the record kept the album selling and selling continuously: "Man on the Moon," and "The Sidewinder Sleeps Tonite" brought in the pop crowd, whilst arguable album signature song "Everybody Hurts," was an acoustic masterpiece, helped by a memorable video. "Nightswimming" and "Find the River" founded off the releases, the last of which coming out almost 14 months after the album itself.

However, the album's lineup was so strong that every track (bar a mid-record instrumental) could have been a single: "Ignoreland" somehow charted despite being only independently available as a promo track sent to radio stations, and in another other world, "Try Not to Breathe," "Sweetness Follows," and "Monty Got a Raw Deal" could have been hit singles, and "Star Me Kitten" was apparently briefly considered for release until it was pointed out the chorus had a swear word (the band had actually retitled the song " * Me Kitten," in return to concerns over publishing the word could have stopped the album being sold in some shops).

The record's title, famously, comes from the motto of Athens restaurant Weaver D's Delicious Fine Foods (who had just been robbed when Stipe asked them for permission to use the sign in return for a licencing fee), whilst the cover art shows the logo of the Sinbad Motel in Miami.

The album enjoyed staggering success, exceeding that of even Out of Time. The record sold almost 2 million copies in the US in 1992 alone and the album has sold far more than 20 million copies in the thirty years it's been available. The band again declined to tour for the album, instead moving in early 1993 to the recording of its follow-up, Monster, the much-promised "rock album." However, the resulting monster (ahem) tour was a celebration of all three albums, since the band had not toured for almost five years by that point.

Automatic for the People is an at-times maudlin reflection on relationships, death and politics, but it's also a melancholy, tuneful masterpiece of nostalgia and reflection.

Thank you for reading The Wertzone. To help me provide better content, please consider contributing to my Patreon page and other funding methods, which will also get you exclusive content weeks before it goes live on my blogs.
Posted by Adam Whitehead at 14:44

Email ThisBlogThis!Share to TwitterShare to FacebookShare to Pinterest
Labels: automatic for the people, music, rem

Thanks for the great article. This is my favorite band of all time…though only my fourth favorite album by them. Yet it’s still pretty much a perfect album.