The final ten episodes of Battlestar Galactica start airing on the Sci-Fi Channel in the USA on Friday and on Sky One in the UK from next Tuesday. As is to be expected, preview DVDs of the first couple of episodes have been sent out and spoilers have started to emerge. For the sake of a few days, I strongly advise avoiding not just the usual spoiler websites (the Patriot Resource, the spoiler pages on Television Without Pity etc) but also the Sci-Fi Channel forums, where so far two monumental spoilers (including THAT one) have slipped out already.

After all, you wouldn't want someone randomly posting an image or spoiler to accidentally wreck your viewing pleasure would you? 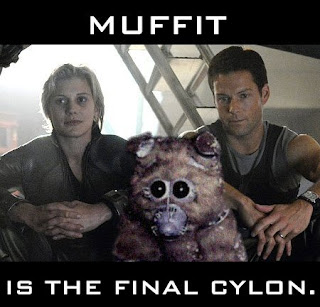 Oh please dear Lord let them not screw it up! They've been absolutely brilliant with this show so far and God I hope they know how to end it well unlike the idiotic writers of the two Stargate series'.

I knew it was Muffit all along. Who'd believe that "I'm just-a-chimpanzee-who-likes-to-play-dressup" routine?

Wanna Watch Battlestar Galactica tv show with all episode. Come here and get all with better quality only in a single click.