Four hundred years ago Lucius Junius Brutus killed the last of the tyrannical Kings of Rome and founded the Roman Republic. Rome's power and might, under the rulership of the Senate, has grown to encompass most of the Mediterranean and its legions hold sway from the Atlantic to the Black Sea and beyond. In 52 BC Rome's most famous general is Gaius Julius Caesar, who in the course of a bloody eight-year campaign has subdued the tribes of Gaul, finally defeating the Gaulish king Vercingetorix at the epic Battle of Alesia. Caesar's returning emissaries and troops have brought much loot from the newly-subdued province back to Rome and his popularity with the people is at an all-time high, to the disquiet of his former ally and friend Pompey Magnus, the head of the Senate. With Caesar determined to use his hard-won power and influence to enact desperately-needed reforms in Rome and Pompey resolved to stand against him, the scene is set for a bloody civil war. 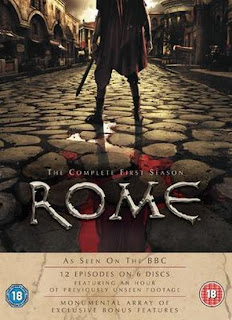 Meanwhile, two of Caesar's soldiers are set on a path that will lead them to greatness. Centurion Lucius Vorenus and legionary Titus Pullo rescue Caesar's grand-nephew Octavian from certain death and recover Caesar's stolen standard. Their names become known and Pullo finds Octavian to be a powerful ally, whilst Vorenus is drawn into the orbit of Caesar and his ruthless lieutenant, Mark Antony, against his own moral judgement.

Rome was a co-production between HBO and the BBC, filmed on location in Italy on an immense open-air set that cost a staggering sum of money to build and was subsequently used by other productions, such as documentaries and an episode of Doctor Who. As a cable production, Rome was free of many of the restraints traditionally placed on American TV drama and featured scenes of violence and explicit sex that some audiences found unpalatable, and resulted in a lot of tabloid coverage, whilst the series' exemplary writing and stunning acting were roundly ignored.

The show is epic, with a complex, multi-stranded narrative following multiple characters across several years of tumultuous history. The political struggle for control of Rome is shadowed by the rise and fall of Vorenus and Pullo's lives among the soldiers and the lower classes. Their viewpoint on events is occasionally reminiscent of Rosencrantz and Guildenstern (if they'd been badass Romans and hadn't died), and provides an interesting viewpoint on the narrative. At the same time the story follows the fierce and building rivalry between Caesar's niece, Atia of the Julii, and his former lover, Servilia of the Junii, over who shall have influence in the new Rome. Servilia's love for Caesar is complicated by the fact that her son, Brutus (a direct descendant of the original Brutus who founded the Republic), is aligned politically against him. An apparently minor subplot follows the education and maturing of Caesar's nephew Octavian, whose intelligent, canny mind and innate grasp of politics is limited by a lack of charisma or reliable friends.

Rome is built around the central figure of Caesar, played with significant gravitas and weight by Ciaran Hinds. Remarkably, the show does not seek to humanise Caesar too much. As in history, his motives are not always clear and his tendency to keep even his closest allies in the dark as to his intentions means he is a somewhat distant figure, even when he has lots of screen time. Hinds delivers an exceptional performance, ably backed up by James Purefoy as Mark Antony. Although Antony doesn't truly shine until the second season, Purefoy channels Pure 100% Magnificent Bastard in his role and pulls it off remarkably well. It is also impossible to find too many superlatives for Polly Walker's performance as Atia, which is nothing short of amazing as the viewer goes from hate to admiration to sympathy, sometimes in the course of a single scene. Lindsay Duncan's more stately, reserved and far colder Servilia is also a triumph and scenes with the two women being polite and correct with one another whilst communicating their mutual loathing and hatred with just a tone of voice or well-timed look are riveting. Kenneth Cranham also excels as Pompey, whom a lesser drama would have painted as a simple villain opposed to the 'good guy' Caesar. Cranham makes Pompey an honourable, sympathetic and complex figure.

However, the series lives or dies by the performances of Kevin McKidd as the honourable, stalwart Lucius Vorenus and Ray Stevenson as the headstrong, passionate Titus Pullo, who are our anchors and eyes throughout the narrative. Both actors are excellent, bringing their characters to life vividly and engaging the audience's sympathy even when they do terrible things. In fact, one of the most underrated accomplishments of Rome is its depiction of a time when morality was very different to now. Many of the major characters murder or betray others for the most trifling of reasons, where the consequences, if any, are more a product story requirements than the legal system. Yet the characters remain compelling and watchable.

The are very few criticisms to be made of the first season of Rome (*****). History is sometimes condensed or dramatised for the purposes of clarity, and the sex and violence may be offputting to some, but the writing, acting, production values and pacing of events is superb. The story is riveting, even when it's ending (the first season ends on the Ides of March, 44 BC) is known in advance. The first season is available on DVD both by itself (UK, USA) and as part of the Complete Rome box set (UK, USA).

At least one of the producers of Rome is in contention to work on the forthcoming HBO version of A Game of Thrones, which is most welcome news. If HBO are even half as successful with that adaption as they were with Rome, it will be an excellent series.
Posted by Adam Whitehead at 02:08

Excellent review Adam! You touched on so many points eloquently. It is one of my favorite shows and I have been loaning out my DVD set to my friends/family to spread the word about how awesome the show is.

(I'm gald you pimped Stardust as well. It is a tragedy that not many people heard of this fantastic movie.)