World War 2.3: Final Impact is the conclusion to the Axis of Time trilogy, following Weapons of Choice and Designated Targets. Those books chronicled how, in the year 2021, a UN multinational carrier taskforce was deployed to drive a terrorist insurgency out of Jakarta. Unfortunately, a nearby scientific vessel undertaking experiments into quantum tunnelling accidentally opened a wormhole through space and time, dumping the entire fleet on top of Admiral Spruance's US Navy fleet sailing to relieve Midway in the summer of 1942. With no way home, the UN force's presence rapidly changed the course of the Second World War. 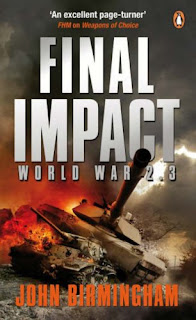 The final novel opens in the late spring of 1944. Both the Axis and Allies are now equipped with considerable technological advances gleaned from the ships from the future. Jet aircraft fight on both sides, and the UN taskforce's immense AWACS and radar capabilities provide the Allies with considerable tactical and intelligence advantages over the enemy. Germany and Japan made alterations to their strategies after capturing some of the ships from the future themselves and these paid off in the short term, with Germany and the USSR concluding a cynical peace and Japan successfully invading Australia and occupying Hawaii. Driven by their superior economic base, however, the Allies are now resurgent, having retaken Hawaii and defeated a German invasion of Britain before preparing their own, improved version of D-Day. The Allies, the Germans and the Russians are now in their own, frantic races to complete the atom bomb before the others, for whoever develops a nuclear arsenal the earliest will likely be the side that wins the war.

Final Impact marks a solid conclusion to the trilogy, although unfortunately some of the more interesting elements that were being developed in Designated Targets seem to have been scaled back. The sociological ramifications of the arrival of the ships from the future continue to be examined, but not quite so cleverly as in the previous volume. The sheer mass of data that the people of the 1940s would have to absorb is overwhelming and you can't help but feel that Birmingham occasionally misses out on a few interesting possibilities (although a scene where John Kennedy quietly arranges for a young Lee Harvey Oswald to be taken into state care is a nice touch). However, with the need to bring this alternate Second World War to a conclusion the sacrificing of some of the quieter elements in favour of the main storyline is understandable. This also explains the somewhat jarring leap ahead of more than a year since the end of Book 2. Several major characters die off-page between the two books, and given the ending of Book 2 it is a surprise to find Hawaii already back in Allied hands. Birmingham obviously felt that expanding on these elements would expand the series to four books or more and I certainly understand him wanting to avoid that.

Final Impact marks a solid ending to the series, with the war rapidly winding down after the nukes start being deployed. Birmingham treats these weapons as the terrible forces they are (some military authors, Turtledove particularly comes to mind, seem to love hurling them around with almost gleeful abandon) and the impact of their use is made clear. The ending is also not particularly neat. The USSR emerges from the war far stronger than it did in real life, with the threat of a real 'hot war' with the Allies seemingly much greater than in reality, but that is not part of the story that the author is telling, so that element is left dangling. As with the prior books, the author mixes action with intriguing historical speculation with solid characterisation and a fascinating contrast of the morales and attitudes of the two time periods: the 'uptimers' are far more inured to war and suffering after twenty years of warfare, whilst the 'downtimers' are prepared to accept far vaster civilian casualties to achieve victory. There is also plenty of humour to be mined, such as SAS commander Harry Windsor having an amusing conversation with his 16-year-old grandmother or disco becoming popular thirty years ahead of schedule, as well as interesting side-effects of the transition, such as questions over who has the copyright on films yet to be made by directors and actors yet to be born.

Final Impact (****) is a solid and worthwhile conclusion to this intriguing trilogy. It is available in the UK from Penguin and in the USA from Del Rey. Birmingham's new novel, Without Warning, which depicts a world where the North American continent was destroyed by an unusual energy phenomenon on the eve of the USA's invasion of Iraq, will be published next week in the USA and I will be reading and reviewing it in the near future.
Posted by Adam Whitehead at 22:15