This is the second novel in the Axis of Time trilogy. I reviewed the first book, World War 2.1: Weapons of Choice over a year ago and enjoyed it, although it did fall a little towards being a stock military thriller, despite the excellent premise. The sequel represents a significant improvement in quality. 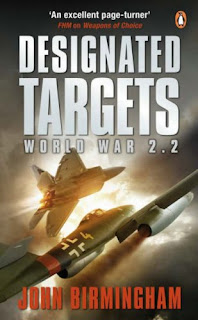 World War 2.2: Designated Targets picks up the story a couple of months later. Thanks to a wormhole experiment gone badly wrong, a UN multinational taskforce en route to relieve Jakarta from a terrorist incursion in 2021 has been transported back to 1942. Its arrival destroys the American Pacific Fleet just before it defeats the Japanese at the Battle of Midway. Despite this, the arrival of the UN taskforce and its pledge of allegiance to the Allied cause initially looked set to swing the war decisively in the Allies' favour, hopefully ending it months or years earlier than it would have done otherwise. Unfortunately, this proves not to be the case. The Russians, Japanese and the Germans all capture ships from the taskforce which ended up being transported further away and their foreknowledge of the future has enabled them to make drastic changes to their war plans far more quickly than the Allies can adapt.

The Germans and Russians have negotiated a ceasefire and now the Germans are concentrating their forces in Normandy and Calais, aware that capturing Britain before the US begins building up its invasion force there in strength is critical. The Japanese have withdrawn significant troops from China in order to launch a full-scale invasion of northern Australia, forcing MacArthur to divert resources to the building of immense fortified lines around Brisbane. The UN taskforce's precious stocks of missiles and advanced ammunition, which cannot be replaced, are running low. However, the US industrial machine is already rapidly adjusting to the information the taskforce has brought with it, with more advanced tanks (to replace the deathtrap Sherman M4s), aircraft and weapons from later in the war being rushed into production early.

The book's storyline follows several military campaigns, notably the invasion of Australia and the German preparations to assault southern Britain, but at the same time also concentrates on the sociological impact of the arrival of the fleet from the future. J. Edgar Hoover's authority has been eroded with the revelation of his personal habits, resulting in him using the FBI's resources to try and destroy the UN taskforce commander's credibility, making great comment of his force's use of women, coloured and (ironically) homosexual troops, not to mention the fact that the taskforce includes German, Russian and Japanese contingents. Meanwhile, the Russian and German high commands are undergoing pre-emptive purges in light of the revelation of the 20th July plot against Hitler and those Soviet leaders who later usurped Stalin's chosen succession after his death (Beria gains some revenge on Khruschev in a rather unpleasant scene). There's also some nice gallows humour here, as Hitler's initial rage at discovering the 'treachery' of several prominent Nazi leaders (notably Goering) late in the war is muted by his tearful appreciation of them going to their graves defending Nazism at Nuremberg.

Birmingham uses the situation for humour to good effect on several occasions, such as Himmler using grandiose musical accompaniment to his PowerPoint presentations (using a captured laptop) and later berating Microsoft for its badly-programmed products. Meanwhile, an American entrepreneur snaps up the rights to represent the 7-year-old Elvis and 16-year-old Marilyn Monroe long before they became famous in the 'other' timeline. As Britain faces the prospect of invasion, the BBC telecopies prints of later WW2 movies and Kenneth Brannagh's Henry V to bolster morale, whilst wiseguys in New York City become overnight fans of The Godfather and The Sopranos. However, the Allies decide to hold back on showing Schindler's List until they really need to fire up the populace against the Nazis.

Birmingham also holds fire on some of the elements he went overboard on in the first book. The poor prospects for black people, women and homosexuals in the WW2 era was rammed home a bit too often to the point where it slowed the progression of the story. In this sequel these elements continue to be pursued, but more subtly through the narrative rather than being info-dumped every few chapters.

There are some weaknesses, most notably the idea that Stalin would agree to a peace deal with Germany when he is told that Russia will win the war in Europe anyway seems massively out-of-character and extremely unlikely. Birmingham suggests that Stalin agrees to this to make preparations for the Cold War against the USA, but this isn't very convincing. Mostly, however, Desginated Targets (****) is a more thoughtful and interesting exploration of the issues raised by its impressive premise, whilst still featuring a lot of action.

The novel is published by Penguin in the UK and Del Rey in the USA. The final novel in the trilogy, Final Impact, is also available now and I hope to get to it shortly.
Posted by Adam Whitehead at 18:09