Originally published in 1958, Non-Stop (originally entitled Starship in the USA, but now restored to its original title) frequently appears among lists of the all-time great science fiction novels. This is an accolade of which it is more than deserving. 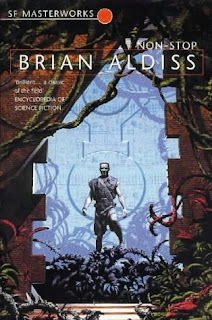 Roy Complain's tribe lives in Quarters, a secured network of living spaces and corridors protected by barricades. Beyond lies the Deadways, where the ponics (plants) lie thick and hunting for game is necessary to keep the tribe alive. Rumours speak of a distant area called Forwards, where a more advanced and deadly tribe dwells. Complain is induced into a conspiracy by Marapper the priest, who has come to believe that Quarters, the Deadways, Forwards and other areas are all part of a world called Ship, which moves through a void for a purpose unknown. Marapper has procured a map he calls 'a schematic', which shows that beyond Forwards lies an area called 'Control', which he believes contains the answers to the nature of the world. Complain agrees to join Marapper and several others as they undertake a dangerous journey to learn the truth about where they are and where they are going.

Non-Stop is fifty-one years old but the writing feels fresh and inventive. It is pretty obvious from the start that the tribes are living in some kind of immense generational spaceship where civilisation has broken down and their origins are forgotten, but Aldiss keeps the reader guessing about how this happened and where the ship is headed. As the narrative continues to unfold, new information is laid at the reader's feet, but often in a confusing and fragmentary manner. What is going on with the apparently intelligent rats who occupy some areas of the Ship? And who are the mysterious Giants who appear and disappear periodically?

Fortunately, Aldiss decides to actually answer these questions rather than giving us an ambiguous ending, and those answers are fascinating, logical and surprising. In fact, it takes tremendous effort once you have turned the final page not to immediately restart the book from the beginning with a greater understanding of events. It is also a thematically strong book, with Complain's external journey of trying to understand the Ship mirrored by internal developments as he realises the problems in his life have been brought about by the pressures of the tribe, which themselves are based on lies. The biggest weakness includes a somewhat unconvincing love story, but this occupies only a couple of pages and is not a major problem.

Aldiss' prose is rich and immersive, his characterisation is convincing and the story compelling. Non-Stop (*****) is a classic and essential science fiction novel for fans of the genre. It is available from Gollancz in the UK as part of the Science Fiction Masterworks range and in the USA from Overlook Press.
Posted by Adam Whitehead at 23:47

Good review, I hadn't heard of this one before but will certainly check it out now.

Having only started to really 'educate' myself about the classic sci fi authors over the past few years, I am always astonished by authors who have been around much, much longer than I assume they have been. Such is the case with Aldiss. This sounds fantastic and I love the presentation of this book. I'll definitely be on the lookout for it.

I see I'm going to have to snag one from overseas though as I am not impressed with the USA cover like I am with the UK version. They ruin too much of the artwork on the American version.

I really really want to buy and read this book, as it's an inspiration for one of my favority movies . .. PANDORUM ( starring Dennis Quaid and Ben Foster ) - ab