The Cimmerian on A Dance with Dragons

The award-nominated scholarly website 'The Cimmerian' has run an article on A Song of Ice and Fire and in particular analysed the current long wait for the fifth volume, A Dance with Dragons, here. The article is reasonably interesting, touching on the current flamewars sweeping various websites over the delays to the book and the shockwaves of fear sent through some of the more ill-informed corners of fandom by the death of Robert Jordan in late 2007. I was rather amused to seem them picking up on an Amazon post I made some considerable time ago about how J.R.R. Tolkien would have fared whilst working on Lord of the Rings in the Internet age. Others later pointed out many flaws in my comparison (not least that some of the target audience for the book would have been more worried about, for example, storming Monte Cassino than waiting for a sequel to a book they read as a kid ten years earlier) which led me to believe I should have cited The Silmarillion instead, but there you go. Anyway, I may have to start introducing myself as "A. Whitehead of the storied legionary city Colchester," were it not for reasons of brevity. 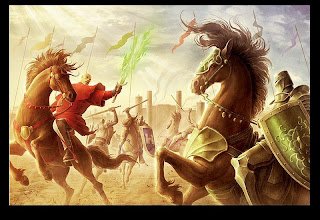 On a somewhat related note, the Winter is Coming blog has issued a general update on the status of production on the Game of Thrones TV series. Unfortunately, we are now in the doldrums of news with pre-production under way but no solid progress to report, since we are still many months from shooting and likely several months from casting even beginning. However, we can hopefully expect confirmation of a shooting and production location in the coming days or weeks.
Posted by Adam Whitehead at 00:59

Email ThisBlogThis!Share to TwitterShare to FacebookShare to Pinterest
Labels: a dance with dragons, a game of thrones (TV series), a song of ice and fire, george r.r. martin, hbo, news, robert e. howard, winter is coming