Way back in the mid-1970s director Stanley Kubrick was looking for a new project and ran across Brian Aldiss' short story, 'Supertoys Last All Summer Long', in which a childless couple create their own android son, who tries to understand if he is real or not. Kubrick was moved by the story and started trying to mould it into a film with Aldiss' help. Their work on the project went on for more than a decade (including the full gestation periods for Kubrick's movies The Shining and Full Metal Jacket) before Aldiss eventually left, exhausted by Kubrick's demanding work schedule and his insistence on drawing parallels to Pinocchio that Aldiss had never intended. Kubrick died in 1999 and Stephen Spielberg picked up the project, released it as the moderately successful A.I. in 2001. Aldiss sold several additional ideas to Spielberg which made it into the movie, and expanded these ideas into two sequels to the original short story. 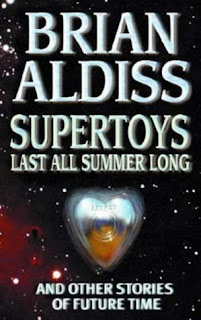 The short story collection Supertoys Last All Summer Long and Other Tales of Future Time was released in 2001 to tie in with the film's release. As well as the original 1969 short story, it features the two sequels: 'Supertoys When Winter Comes' and 'Supertoys in Other Seasons'. These very short stories (each is 2,000 words or less) depict the story of David, an android who is created for a childless couple, but whose quest for self-identity proves problematic and he eventually leaves to wander the city. These stories are masterfully economical, transmitting much of the same story and concepts as the movie with Spielberg's sugar-coated schmaltz and Kubrick's worrying Blue Fairy fixation removed in a very small number of pages. You can read all three in considerably less than a single lunch break, as compared to the movie's sometimes bum-numbing two-hour running time.

Obviously, 6,000 words do not make a full collection, so an additional sixteen stories are included. They are united by the themes of dislocation and loneliness, which are approached from different angles. Many of the stories are ambiguous and few have any solid resolution. Aldiss' goal here is to raise issues and questions and see what the reader makes of them, not provide pat answers. Interestingly many of the stories are prototypes or condensed versions of other stories he has written: the lengthy seasonal cycle of 'Apogee Again' feels like Aldiss' epic Helliconia Trilogy on extreme fast-forward, whilst 'A Whiter Mars' is a direct tie-in to his stand-alone SF novel, White Mars. Some of the stories are obvious - 'III' is a simple commentary on humanity's fixation of exploiting natural resources, whilst 'Dark Society's twist ending will likely be spotted by experienced genre readers but remains haunting nonetheless - but others are more inventive, such as the Lord of Light-esque 'Becoming the Full Butterfly' and the judgmental 'Galaxy Zee'. 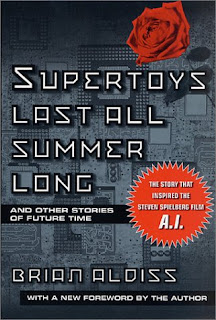 This is a fine collection of stories reflecting Aldiss' impressive writing range. There is a feeling of distance and coldness in many of the works - possibly an attraction for the likewise non-sentimental Kubrick (Blue Fairy obsession aside) - which may be offputting for some, but overall this is an intelligent and thought-provoking book and well worth seeking out.

Supertoys Last All Summer Long (***½) is published in the UK by Orbit (out of print but copies seem available on Amazon) and by St. Martin's Griffin in the USA.
Posted by Adam Whitehead at 17:15