The year is 44 BC. Julius Caesar is dead, assassinated by a cadre of senators led by Brutus and Cassius. The Julii and Caesar's ally Mark Antony prepare to flee, but Caesar's newly-anointed heir Octavian discovers a legal loophole that forces Brutus to agree to a reconciliation. Unfortunately for the conspirators, the popular mood in Rome swings decisively against them and they are forced to flee. When Octavian and Antony are divided by their own disagreements, the scene is set for a devastating three-way civil war which will eventually culminate at Philippi, one of the greatest battles in Roman history. 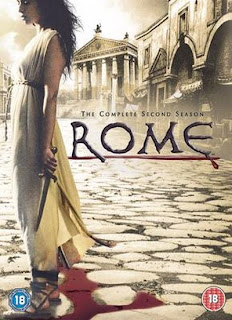 Meanwhile, former centurion-turned-politician Lucius Vorenus has seen his family torn apart by betrayal and treachery. Whilst Titus Pullo tries to save his friend's soul, Vorenus is placed in command of the Aventine Collegia and told to keep the peace between the warring criminal gangs. At the same time, the arrival in Rome of Timon's brother coincides with a rise in Jewish nationalism.

Rome's second season picks up at the moment Season 1 ends, with Caesar dead, Vorenus devastated by his loss and the Republic in danger of falling apart into anarchy. Given that the entire storylines for the second and planned third seasons had to be compressed into one season, and only ten episodes at that, the second season moves forward decisively and rapidly. The second season covers a period of fourteen years, and several times multiple years elapse between episodes which makes the season flow slightly less well than the first. In particular, the intrigue between the factions is covered in less depth and Vorenus and Pullo's storyline is to some extent separated from that of the political story, meaning that the Rosencrantz & Guildenstern-like angle from the first season is also diluted although the stories do converge decisively in the final two episodes. Timon's storyline is also given a rather unsatisfactory resolution due to this compression, which is a shame as his 'redemption' from a simple thug in Season 1 into someone with a moral conscience is one of the unsung triumphs of the second year.

Despite this haste, the series remains gripping and compelling viewing. Particularly amusing is the way that politics is depicted as one of the forms of entertainment of the day and how the notable unlovable Octavian wins popularity by surrounding himself with a 'next generation' of young, handsome but capable figures such as Agrippa and Maecenas, and arranges a crowd-pleasing marriage to the young, beautiful and intelligent Livia. These new actors fit into the tapestry of the series very well: Simon Woods replaces Max Pirkis to portray the adult Octavian and does a brilliant job portraying the cold, logical future Emperor, Alex Wyndham is excellent as the debauched Maecenas and Alice Henley is clearly relishing playing the twisted Livia. However, Allen Leech has the most challenging role playing the bumbling, well-meaning Agrippa who serves as Octavian's conscience, and hits the right note between Agrippa's somewhat sappy side and his lethal capabilities on the battlefield (Agrippa's military capabilities eclipse those of Antony in very short order, to the latter's fury). 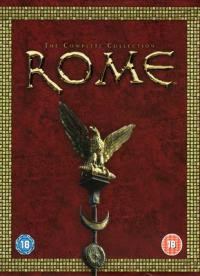 Of course, the seasoned actors continue to deliver the goods. James Purefoy (as Antony) graduates from a supporting role in Season 1 to command almost every episode of Season 2 with an impressive, theatrical presence in a gift of a role. Unmentioned in my review of Season 1 was David Bamber as Cicero, whose task is challenging (Cicero was one of the most learned, respected and gifted orators of his generation) but his performance is compelling, especially his concluding scene with Ray Stevenson's Pullo in episode six, which may be the single finest moment in the entire series. Stephenson continues his excellent work as Pullo as the character is put through the wringer but, unlike the first season, manages to keep his head above water and even prosper. However, if Season 2 had a unifying theme it would be the journey through Hades and back of Lucius Vorenus. Kevin McKidd is superb as his character is forced again and again into some very dark decisions.

Eventually the dust settles and Rome finishes where it really had to, with Octavian ascending to absolute power with the Senate as little more than his puppet and one of the most famous love stories of all time reaching its tragic ending. Whilst it would have been perhaps more satisfying to see the series go on for longer, it ends brilliantly and the series' relative brevity becomes another one of its strengths.

Rome: Season 2 (*****) is a worthy continuation and conclusion to the story begun in the first season. With excellent effects (the Battle of Philippi is impressively depicted) and jaw-dropping set design (the new set of the Aventine Collegia is genuinely amazing in its size and scale) backing up the superlative writing and acting. As with the first season, there is still a lot of violence, swearing, sex and nudity so the series isn't for everyone, but it is well worth watching for those who can accept these elements as part of the narrative. The second season is available on DVD by itself (UK, USA) or as part of the Complete Rome box set (UK, USA).
Posted by Adam Whitehead at 16:32