A while ago the SF&F blogosphere was rocked (okay, slightly tilted) by accusations of publishers 'overhyping' their books and leaving disillusioned reviewers giving overtly harsh reviews to books which they'd have enjoyed more if they'd come to them fresh. It was a bit of a three-minute wonder in which the particular accused publisher pointed out that their 'hype' consisted of them saying they thought the book was good and the author saying they thought the book was good, which isn't so much 'hype' as 'their job'. 'Hype' on the other hand is what Peter Molyneux does very well. 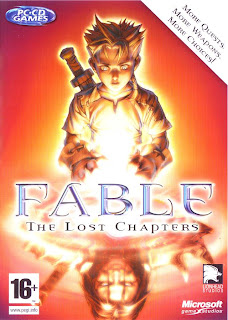 For those not in the know, Peter Molyneux is responsible for many of the greatest computer games of all time, from 1980s strategy classic Populous and its superior sequel through Powermonger, Theme Park and Dungeon Keeper. As the creator of Bullfrog Studios, Molyneux is also responsible for giving us the godlike Syndicate (although he didn't have that much to do with it, which may or may not be telling; okay, it is telling). In the late 1990s Molyneux left Bullfrog, which had been absorbed by the glutinous mass that was and still is EA Games, and set up a new studio called Lionhead. At this point Molyneux decided that having his hand in several of the greatest games ever made meant that any game he automatically created in the future would also be blindingly amazing and thus announced that his new company's first game would be a work of towering and astronomical genius which would force anyone who played it to explode from the sheer awesomeness of playing the game. Unfortunately the game design department didn't get the memo, as instead they made Black and White, which was not very good, although it did allow you to feed people to a giant cow and then beat it up.

Undaunted by the mauling of his bovine-abuse simulator, Molyneux unleashed his hype on the company's new RPG, Fable. The game would have immense moral consequences, where every NPC had a different attitude towards you and would remember your actions towards them, where it would be possible to get married, have kids and a home life between adventures and the game would subtly adjust to the choices you made. Needless to say, very little of this actually appeared in the game, which turned out to be BioWare-lite.

So ignoring the hype, what about the actual game? Well, you start off as a young scamp in your home village where peace and happiness spread until bad people turn up, torch the village, kidnap your mother and sister and butcher your father to death in front of you. Luckily, a wise old mentor/wizard Obi-Wan figure turns up, rescues you, and whisks you off to the 'Hero Guild' where you get to train your sword, archery and spellcasting abilities until you are ready to face the world and take on some quests. The 'twist' is that you get to decide whether you are a good person or a bad person. Erm, you know, the 'twist' that RPGs as far back as 1996's Fallout had pretty much included as a matter of course? Of course, the game doesn't really allow you to turn out to be a really evil SOB and follow the ramifications of that logically, so you can butcher your friends, torch multiple villages, kill hundreds of innocents and still be allowed back into the Guild to pick up a new quest, level up and follow the main story, which is pretty forgiving of them.

The additional stuff is pretty much worthless. You can get married, but all that does is give you a different home base and an NPC wife (the game doesn't even allow you to play a female hero, although the sequel does) who just parrots random dialogue at you. You can't have kids, and all this scene-setting gubbins really does is distract from the meat of the game, which is performing quests. You gain quests from the guild (and occasionally other places) which require you to head off into the wilderness and perform convoy, protection or rescue missions for various people. There are also very occasional 'evil' quests as well, but these are few and far between. The main story picks up at fairly frequent intervals and draws you along a path of self-discovery as you learn more about the world and your background.

At this point Fable kicks into life. The story is unoriginal, but nicely executed. There's some strong voice acting and a decent sense of humour. The combination of combat and spells is nicely done, although ranged combat turns out to be a waste of time. I think I used my bow about four times in the whole game. Swordplay and magic will get you through most circumstances. The game is also interesting in that it doesn't force you to become a fighter, mage or archer as you divide experience points between the three as you choose, allowing a decent level of customisation. There's also a nice variety of enemies to fight. However, towards the end of the story you become so ridiculously powerful that even the extremely tough new enemies introduced in the 'Lost Chapters' at the end of the game (not included in the original, X-Box-only version) do not present much of a challenge.

Even with the addition of the 'Lost Chapters' material the game is also fairly short for an RPG, coming in at the 12-hour mark including all the side quests. However, the game's relative easiness as well as its more light-hearted approach does make it a decent RPG for beginners than something more hardcore like Baldur's Gate II or even Fallout 3, and more experienced gamers will find it stands up quite well as an enjoyable game, though not one that is breaking any boundaries.

Fable (***½) is a fun, light and amusing game which is pretty entertaining. Although it is on the short side, this has to be balanced against the fact that you can typically find copies for £5-£10, since it is four years old now, and for that price is excellent value for money. And for that same reason you can pretty much ignore the hype as well and take the game for what it is: a solid amount of fun. The game is available now in the UK (PC, Mac, original X-Box) and USA (PC, Mac, original X-Box).
Posted by Adam Whitehead at 00:13

Good write-up, Adam. Fable was a lot of fun and looked gorgeous, but was over far too quickly and had very little depth. Alright, so you can kick chickens around and get pissed in a tavern, but that sort of thing got old pretty quick, leaving you with the main quest and that was over very quickly.

Ironic that a game touted during development to be one of the most detailed and absorbing ever ended up as one of the more shallow RPGs of recent years.

Yeah, as I said it also had problems by being BioWare/Black Isle-lite. It didn't do the moral choices thing even as well as Jade Empire or Knights of the Old Republic did, and compared to the amazing way Planescape: Torment handled morality as a game concept it was very shallow.

I got this game for Christmas a couple of years ago and thought it was rubbish (although admittedly I gave up on it very early on). I found it a bit cartoony and got bored of the training bit in the guild.

My problem is that the PC games are all either too easy or too difficult. The Longest Journey and the Discworld games are the only half decent ones I've found in a long while.

Personally I wish they'd scrap the PS 50, or whatever make they're on now, and BRING BACK THE SEGA (even though my brother looks like he wants to shoot me when I say so). The sega rocked! And I could actually control Sonic on it rather than just sending him sprinting off a frickin' cliff all the time.

Adam: Never played Planescape, sadly. Sounds like I've missed out. Played the Baldur's Gates though, and they redefined the RPG experience. The second one was as deep as the Atlantic.

Alex: Most definitely - bring back the Sega! The Megadrive is one of the greatest consoles of all time...