The original Half-Life, released back in October 1998, was the title that redefined the first-person shooter genre. As well as featuring the best combat of any FPS to date, it hit on the idea of never having the player's character, Gordon Freeman, speak or stopping the action to have an expository cut-scene. However, some players found the resulting lack of explanation for the confusing plot to be frustrating. Despite this, Half-Life and its expansions (Opposing Force and Blue Shift) won a substantial number of awards and went on to sell millions of copies. A sequel was inevitable and after a protracted development cycle (including the partial theft of the game's source code) Half-Life 2 appeared to much fanfare in November 2004. Since then, the game has sold more than 8.5 million copies, making it one of the biggest-selling games of recent years. 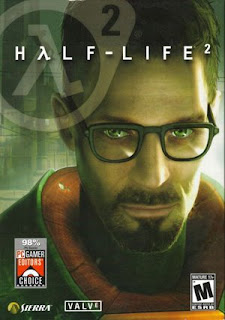 In the original Half-Life, junior physicist Gordon Freeman was present when an experiment with teleportation technology at the underground Black Mesa research facility in New Mexico went catastrophically wrong. Dimensional rifts to another world, Xen, were opened and hostile creatures poured through. Over the course of several days of non-stop combat, Freeman made his way across the Black Mesa installation, reversed the resonance cascade and briefly crossed to Xen to kill the Nihilanth, the alien entity who had noticed the catastrophe and sent its minions through to investigate. At the end of Half-Life Freeman was 'recruited' by the mysterious G-Man, who appeared to be a suit-wearing human with odd diction but was actually a being of tremendous power and unknown origin. He placed Freeman in stasis for the time when he would be needed again.

Half-Life 2 opens approximately ten years after the events of the first game. The G-Man awakens Freeman from stasis and informs him that the world is a very different place now. A disoriented Freeman is dumped on a train pulling into a station in an Eastern European city. The precise location of the city is never revealed, as whatever name it used to possess has been replaced by the terse designation, 'City 17'. Freeman learns that the resonance cascade at Black Mesa attracted the attention of a powerful alien race known as the Combine, who subsequently invaded the Earth and destroyed its military and governments in the Seven Hour War. The planet is now occupied, most of the population has been killed off and the surviving remnants are forced to work for the Combine. The Combine is draining the planet's oceans and it is hinted they are doing something to the atmosphere as well. Periodically the surviving civilians are taken away to be transformed into a cybernetic slave labour force or into cybernetically-enhanced soldiers utterly loyal to the Combine. Freeman also learns that his former boss, Black Mesa Administrator Wallace Breen, is now running the planet on behalf of the Combine, suggesting he may have had foreknowledge of what was to happen.

This information takes a little while to filter through, as the first section of the game sees a confused Gordon making his way through City 17, aided by his old comrade Barney Calhoun (the player's character from Blue Shift) and the other rebels, initially on foot and then by hovercraft. This section of the game eschews exposition in favour of action, with large-scale gun battles with Combine police forces and a genuinely exciting chase sequence through the sewers and along the river with airborne Combine forces in hot pursuit. Upon reaching the rebel hideout at Black Mesa East Freeman is given an experimental 'gravity gun' but is cut off from his allies by a Combine attack, and has to make his way through the town of Ravenholm which has been infested by aliens from Xen, such as the 'headcrabs' who turn ordinary humans into zombie-like automatons. The shift of tone from traditional action game to a Resident Evil-style survival horror is expertly pulled off. The second section of the game opens with Freeman having to drive along Highway 17 to reach the Combine's prison at Nova Prospekt in order to rescue an important Resistance scientist, Eli Vance. At this stage Freeman is joined by Eli's daughter, Alyx Vance, who proves an invaluable ally. Events at Nova Prospekt trigger the uprising of the human population against the Combine, and the last section of the game sees Gordon and Alyx taking part in full-scale street battles with more heavily-armed Combine forces and their powerful 'Strider' vehicles in an attempt to storm the Combine Citadel and destroy their base of operations.

Half-Life 2 is a tightly-scripted first-person shooter. Those who have gotten used to the freedom afforded the genre in Far Cry and Far Cry 2 (or to a lesser extent Crysis) may be taken aback at how linear Half-Life 2 is. In the original game the linearity of the game was rationalised by the setting, an underground base made up of offices, corridors, silos, factories and military checkpoints. However, in environments such as city streets and open stretches of highway, Half-Life 2's linearity is far more noticeable with only one direction to proceed in at any one time. In an age where FPS games seem intent on forging new ground in giving choice and options to the player, Half-Life 2's lack of freedom feels pretty dated. Once you get used to it, the strengths gained from choosing this route become more apparent, with spectacular set-piece action sequences, thrilling battles and even some nice moments of characterisation. Whilst you rarely spend time with NPCs other than Alyx, the animation, direction and voice acting of characters such as Barney, Eli, Dr. Kleiner and Dr. Mossman are all top-notch. The atmosphere of the game is also fantastic, with the excellent art direction and minimalist music providing a pervading sense of wrongness that this isn't how the world should be and it may all be Freeman's fault. At around 12 hours in length, Half-Life 2 is pretty long by the standards of most modern FPS games (such as Call of Duty 4, which barely clocks in at half that, or FEAR which comes in a good two hours shorter). Also, whilst the game looked extremely impressive on release its PC system requirements were modest, and most modern computers can run the game at full detail without breaking a sweat.

Whilst the pluses are all significant, and give the game its classic status, there are a couple of additional problems which come from the linearity of the title. Because there is only one route through the game and one possible ending, its replayability is severely limited. It's unusual for a player to find every side-room, explore every roadside building or locate every weapons cache on a first run-through of the game, so it's definitely worth playing through a couple of times but you simply don't have anywhere near the variety of say the original Far Cry, where the sheer openness of the levels means there are often a half-dozen or more routes through each stage of the game. A second issue is that both enemy and ally AI (Alyx being an honourable exception) is a bit lacking at times and worryingly comes across as less inventive than the much older original game, although still a step ahead of many contemporary games. A further issue is that the game ends (deliberately) very abruptly, literally in mid-sentence, so you may wish to have the continuation, Half-Life 2: Episode One, ready to go once you have finished this game.

Niggles aside, Half-Life 2 is a classic and gripping action game which is well-worth playing. The atmosphere is terrific, the combat visceral, the weapons inventive (particularly the gravity gun) and the game immersive, once you get used to its limitations.

Half-Life 2 (****½) is no longer available as a solo game in the UK, but only as part of The Orange Box, alongside Episode One, Episode Two, Team Fortress 2 and the spectacular Portal. This package, available for the PC, X-Box 360 and PlayStation 3, is well-recommended. The game is still available as a solo PC game in the USA, and also as part of The Orange Box (PC, 360, PS3).
Posted by Adam Whitehead at 21:19

Blood was okay, but I felt that SHOGO: Mobile Armoured Division (to which a modern sequel would be awesome) was better. IIRC, it was based on the same engine as Blood.