The Ninth Circle by Alex Bell

The Ninth Circle is a mystery written in the form of diary entries by the protagonist, Gabriel Antaeus, after he wakes up one morning in Budapest, Hungary, with amnesia. As the story unfolds Antaeus uncovers clues as to his former life and meets people who knew him from before. Gradually he puts together the pieces, and the picture that emerges becomes increasingly disturbing. 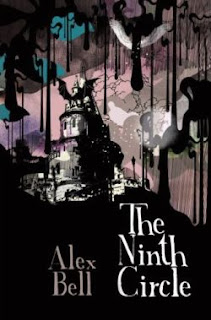 This is the debut novel by British author Alex Bell, completed whilst she was still at university. For a debut novel, this is an accomplished work with a central mystery presented intriguingly which unfolds logically and also unpredictably. The author sows enough red herrings and false trails into the text that you are never entirely sure where the book is going, or if there is a supernatural or a mundane explanation for the events that are unfolding. The diary format also works well, although the traditional first-person problem of defusing tension is still present: if the protagonist is in deadly danger you can probably guess he's going to survive by virtue of the fact that he lived to write up the experience in his diary. However, this is offset by the first person narrative allowing us to get into Antaeus' head and see what makes him tick in a very effective manner.

The Ninth Circle is, by SF&F standards, a relatively short book with a fascinating story told through by a conflicted protagonist. The story keeps you guessing up to the last page. The only major negative I can see is that you may feel compelled to visit Budapest after reading the book, as the city is depicted with real attention to detail and obvious affection throughout.

The Ninth Circle (****) is available now in the UK from Gollancz in tradeback. The mass-market paperback will be available on 9 April 2009. The book does not have a US publisher as yet but is available on Amazon.com. Alex Bell's second novel, Jasmyn, will be published by Gollancz on 18 June 2009. The author has a website located here.
Posted by Adam Whitehead at 23:24

Wow, the famous Werthead, King of Reviews, gave me four stars. So my sales should increase by, what, about 700% now, right? I’ll have to buy you a beer next time there’s a Phoenix shindig (it’s not bribery if the beer comes *after* the review, y'know).

Years of detailed statistical study have shown that a positive review from me can indeed improve sales of the book in question by 700% However, the study was undertaken after a liquid lunch and later shown to be erroneous. Put in a decimal after the '7' and remove the percentage sign, and you may be closer to the real figure ;-)