New Song of Ice and Fire RPG on its way!

Green Ronin, publishers of many popular roleplaying games such as the True 20 system, are about to release a new RPG based on George R.R. Martin's A Song of Ice and Fire novels. A previous RPG, based on the D20 system, was released to great acclaim by Guardians of Order in 2005 but the company went bust shortly thereafter. The new game uses an original rules set developed specially for the setting. 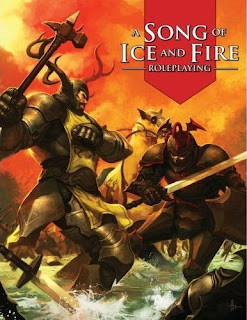 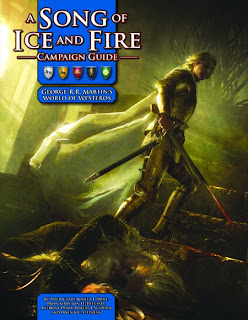 The first release will be the Song of Ice and Fire Roleplaying core rulebook, due out at the start of March. This will be followed in April by the Narrator's Kit, which includes a gamemaster's screen (depicting the Wall), a 16-page adventure and a map of Westeros. In the summer will follow Peril at King's Landing, a full-scale adventure set during one of King Robert Baratheon's tourneys, and the massive 256-page Song of Ice and Fire Campaign Guide, a substantial resource for both gamers and also general fans of the series. Because of the delay in publication of these books, Green Ronin have already done substantial work on some follow-up products, including ones that will allow very different types of games to be played. The default model has the players representing their own House in the game of thrones, but these new expansions will also cover campaigns set amongst the Night's Watch amongst others. Green Ronin hope to start releasing these new books as early as the autumn.
Posted by Adam Whitehead at 10:39

Email ThisBlogThis!Share to TwitterShare to FacebookShare to Pinterest
Labels: a song of ice and fire, george r.r. martin, news, rpg