I travelled up to London tonight for a multi-author signing event at Forbidden Planet, also known as the 'mingle' as the authors brushed shoulders with the great unwashed without the benefit of a desk to cower behind. The evening was the idea of author David Devereux, whose new book Eagle Rising (pimped by Graeme here) was being launched and he decided to invite along a bunch of other authors to turn it into a bit of a mini-SF con in the bowels of FP. 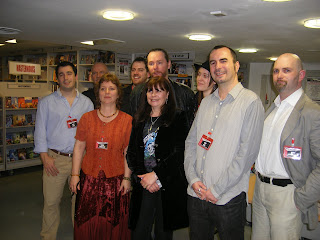 The other attending authors were the omnipresent Joe Abercrombie (who heroically strove to sell people copies of the 'new editions' of The First Law - where the typeface and font on the front cover are slightly different), Jaine Fenn, Suzanne McLeod, Mark Chadbourn, Alex Bell, Jon Courtney Grimwood, Steven Savile, Tom Lloyd and James Swallow. Also present, but only in a supporting capacity, were Chris Wooding and the ultra-popular Robert Rankin. Many books were bought, more were signed and much fun was had by all.

No scoops from the publishers this time. I did hear from Gollancz's dark lord Simon Spanton that Ian McDonald's The Dervish House (which will do for Turkey what River of Gods did for India and Brasyl did for, erm, Brazil) is now a 2010 release rather than a late 2009 one, but that's about it for insider info.

I did pick up a lot of books at the event and correspondingly hope to get my reading back in gear shortly as it's been taking a battering in favour of DVDs and computer games in the post-Christmas period.

EDIT: A slight amendment to reflect the fact that the evening was arranged by David and Danie from Forbidden Planet, and a most enjoyable evening it was as well.
Posted by Adam Whitehead at 01:28

I like how Mark Chadbourne is wearing the wrong name tag....

Aidan, that'll be because we all started swapping name tags as we got near the end of the signing. I was Joe Abercrombie for a while, then Alex Bell for a few seconds before turning into Tom Lloyd.

Yes, it got a bit silly. But we all had as much fun as the readers seemed to, so I'd call that a win.

Thanks for the post - and the FP shoutout. That was a class event!!