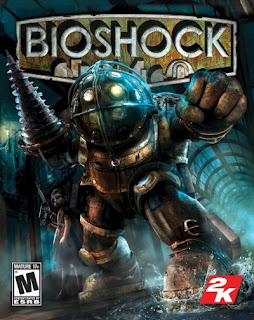 Originally released at the end of 2007, BioShock is a first-person shooter which borrows some minor elements from roleplaying games. Created by some of the same team-members behind the popular and successful System Shock 2, BioShock was marketed as a 'spiritual successor' to that game. It achieved some critical acclaim after release, garnering extremely high scores from games review magazines.

The game is set in 1960. A passenger aircraft crossing the Atlantic Ocean crashes in the sea 200 miles from Iceland. The sole survivor, a man named Jack, finds a lighthouse standing on an isolated island nearby. To his surprise, the lighthouse is the surface entry to a vast underwater city called Rapture. Built by wealthy industrialist Andrew Ryan a decade and a half earlier, Rapture was designed to be a city independent from any government or religion outside. After arriving in the city, Jack is contacted by a man named Atlas who tells him the city's society has fallen apart, and most of the inhabitants have gone mad and become genetically-mutated 'Splicers' who hunger only for 'ADAM', a material which can grant great powers to the wielders. Atlas convinces Jack to help him rescue his wife and daughter from captivity. Jack is also contacted by a woman named Tenenbaum, who explains that ADAM is produced by genetically-modified young girls named 'Little Sisters', and Jack can absorb ADAM from any Little Sisters he comes across. Tenenbaum urges Jack to spare the Little Sisters and set them free from the ADAM influence, whilst Atlas suggests that Jack kill them to gain a lot more and become more powerful. Jack's decision will determine the course of the rest of the game.

BioShock plays pretty much as a standard first-person shooter. Jack can wield a large number of weapons, many of them with different types of ammunition for different circumstances. He can also use EVE (a weaponized form of ADAM) to power 'plasmids', which give him certain powers, such as the ability to hurl fireballs, shoot lightning out of his hand or levitate objects with his mind. Combat can be greatly enhanced by switching between plasmids and traditional weapons for different circumstances. The game dips its tools in the RPG category by giving out different quests and adopting a 'mission hub' structure for its levels, but without an active inventory system and an inability to talk to people (not to mention that every single person you randomly encounter in the game wants to kill you, with important NPCs only appearing behind bullet-proof windows or screens) this is not pursued much.

BioShock has an interesting storyline and a philosophical streak to it, which asks questions about free will and determination. Whilst intriguing, it's explored in a considerably less compelling fashion than Planescape: Torment, and to anyone who's played that older game BioShock feels a bit lightweight (not to mention predictable: some plot twists are very close to those of that older game and some others as well). Of course, most modern gamers haven't, so kudos to 2K Games for trying something a bit more interesting than just the standard run 'n' gun action. Unfortunately, that action is somewhat lacking. Your character feels very 'heavy' for lack of a better word, and combat is sluggish and unresponsive as a result. For most opponents it isn't a problem, but for the Big Daddies (whom you have to kill to get to the Little Sisters) it can turn into a total nightmare as they can kill you with maybe three hits. It isn't until very late in the game that you get weapons powerful enough to make the task less frustrating. Also, and this is utterly enraging at the start of the game, if you die you have to wait whilst a brief unskippable sequence plays (where your character is revived at a re-lifing chamber, often located inconveniently distant from the place where you died) before you can hit re-load.

BioShock has an offbeat and unusual story, and the art design of the game is different and often gorgeous, channelling the 'Americanapunk' vibe of the earlier Fallout games (and the more recent Fallout 3). The graphics are impressive throughout, with particularly good water and lighting effects. The more colourful palette of the game is also nice change from a lot of other modern 'gritty' FPS, and it's certainly admirable to encounter a game which actually has a purpose or theme to its plot beyond mindless violence. However, the game is nowhere near as revolutionary as it seems to think it is, combat is leaden and somewhat unsatisfying, the save/load system is frustratingly slow, the end-game boss is preposterously easy to defeat and the 'good' ending is corny.

BioShock (***) is an entertaining game that passes the time, but all the magazine writers that gave it 95% were clearly smoking some very strong substances indeed. The game is available now in the UK (PC, 360, PS3) and USA (PC, 360, PS3). A sequel, BioShock 2: Sea of Dreams, will follow at the end of this year or the start of next.
Posted by Adam Whitehead at 22:00

Email ThisBlogThis!Share to TwitterShare to FacebookShare to Pinterest
Labels: bioshock

I think one of the largest problems with the early reviews was the hype factor.

But I agree with you. While I thought the game was amazing at first in the way it set the mood and the overall atmosphere, as I delved deeper It just seemed to drag.

But the part with the Golf Club is one of the highlights in my gaming life, I must say.

Glad to see you finished the game as I could not. As below I'm pretty sure that the hype factor killed my playing experience. I was fairly depressed by the straightforward FPS combat, Diabloesque enemy re-skins, and typically poor AI (Big Daddies aside).

As great as the story was it just wasn't enough to get me past the all too familiar gameplay.

I may have to rewrite the review slightly as I totally left something out that drove me up the wall: respawning enemies. It's not quite as annoying as System Shock 2, where bad guys would respawn in dead-end corridors behind you, but it's still pretty bad. Painstakingly clearing an area out of enemies only to find a dozen more showing up out of nowhere is incredibly frustrating, and there's a reason you no longer see it in any other FPS game.