The Terror by Dan Simmons

In the summer of 1845, the Royal Navy dispatched two ships, HMS Erebus and HMS Terror, under the command of Sir John Franklin to the Arctic Ocean. Their orders were to enter the Canadian Arctic Archipelago by means of Lancaster Sound (west of Greenland) and seek out the North-West Passage, which would lead them to the Pacific via the Bering Strait and thus home by way of Russia, China and India. Whilst both the eastern and western edges of the Passage had been explored by this time, no ship had successfully travelled the entire length of the Passage.

Neither ship was heard from again. 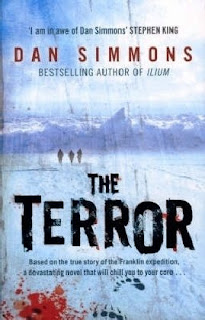 Over the following years, concern over the expedition's fate grew and many search and rescue expeditions were launched, some by ship and others by foot, travelling up the rivers from the Canadian interior. A number of relics and remains were found, confusingly scattered across a large area of more than a hundred miles surrounding King William Island, and over time other expeditions have pieced together the facts, upon which the narrative of The Terror is based.

The Terror, like Stephen Donaldson's Gap series and George R.R. Martin's Song of Ice and Fire, uses a rotating third-person limited point of view system, moving between several characters. The narrative opens in late 1847 with the two ships forced to spend a second winter in a row stuck fast in the ice. Extensive flashbacks and diaries record the earlier stage of the expedition, with optimism over finding the North-West Passage turning to despair as the ships make little progress against the ice. After being snowed in at King William Island, an unidentified predator starts stalking the crews, accounting for many lives including that of Sir John Franklin, leaving Captain Crozier of the Terror in command of the expedition. Discovering that the ships' stores are contaminated by an unknown source (later - in real life - revealed to be lead poisoning from either the inadequately-sealed tinned foods or the water tanks) and they cannot survive another winter, in April 1848 Crozier makes the decision to strike out for the Canadian mainland by foot and attempt to follow the Back River to civilisation.

The Terror is a meticulously researched novel. Simmons has clearly done his homework here, further evidenced by the considerable bibliography. The details of shipboard life are fascinating, and Simmons is painstaking in ensuring that the reader understands at all times the options and problems facing the expedition's leaders, most notably the paralysis that grips them when presented with the option of abandoning ship and continuing overland and over the ice on foot, or hoping that a summer thaw will free their ships. The characters - virtually all of whom are given the names of the real Franklin Expedition crewmen - are vividly drawn, from the flawed but nonetheless charismatic and professional Crozier to the bumbling Franklin to the naive but eventually heroic surgeon Goodsir to the perpetually cheerful Blanky, and the use of them to tell the story is very well done, although there is a pause when Simmons has some of the crew doing some very unpalatable things with no evidence those individuals ever did those things in reality. However, that is often the case with fictionalizing real events. Simmons also nails the biting, freezing atmosphere of the Arctic and imbues the story with some very atmospheric descriptions of the frozen ice landscapes. 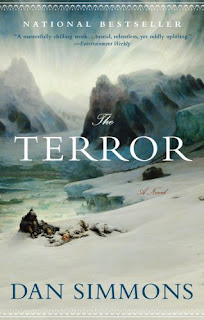 The problem with the book is the presence of the 'thing on the ice' (a deliberate nod to the 1951 movie The Thing From Another World), a terrifying monster which shows up at almost regular intervals to kill a few people, sometimes mutilating them (apparently for pleasure), before vanishing. The first time this happens it is effectively shocking. Around the fifth or sixth it starts to get a bit boring, even comical. The monster is also highly reminiscent of the Shrike, Simmons' superb creation from his Hyperion Cantos series of SF novels, and although the monster in The Terror isn't quite as godlike (nor does it have a giant metal tree to impale people on), its abilities will feel very familiar to anyone who has read the earlier work. Eventually an interesting explanation is given for the creature, cleverly based on Inuit mythology, but it literally comes in the final two chapters of a 950-page novel, long after the creature's appearances have stopped raising any genuine feelings of tension or fear. Also, the non-monster sections are as well-written and gripping as the bits where it does appear, making the storyline feel a bit redundant. When the genuine horrors of surviving in the Arctic with poisoned supplies and dwindling hopes are this compelling, why throw in a mutant fourteen-foot-tall polar bear with big sharp pointy teeth on top of that? Whilst thematically interesting, the presence of the monster feels like it cheapens some of the genuine accomplishments of the real Franklin Expedition.

The Terror (****) is often brilliant, but it is overlong and the monster is overused, robbing it of its power. Ignoring that, this is a gripping and fascinating novel of man's desire to survive no matter the odds. The novel is available in the UK from Bantam and the USA from Little, Brown.
Posted by Adam Whitehead at 20:35

Email ThisBlogThis!Share to TwitterShare to FacebookShare to Pinterest
Labels: dan simmons, the franklin expedition, the terror

Your article is on-the-ball. I agree that Simmons should have introduced(at least parts of)the eskimo explanation a bit earlier on. Perhaps around about when Silence was spotted appeasing the beast with 'throat-singing'?
I loved the book but like you say, the tension felt when the beast initially arrived and when later it was stalking the men fleeing for Banks River was sadly diminished.